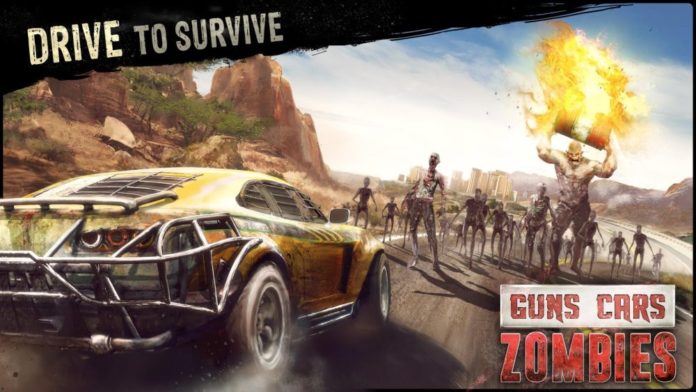 Guns, Cars, Zombies is a beautiful post-apocalyptic driving game that challenges you to drive to survive. Upgrade your car, complete objectives and smash those brainless zombies on your way to glory and better rewards. A really good game with tons of game modes and things to do. And we’re here to help make it even better for you by sharing some Guns, Cars, Zombies cheats and tips.

So if you want to get better at this game or at least make sure you don’t miss out on some obvious features or goodies, read on for Touch Tap Play’s tips and tricks for Guns, Cars, Zombies!

Car Upgrades
There are two types of upgrades for your car: the ones you can access through the “Customize” menu and which are permanent for all game modes, and the Fuel & Armor upgrades.

The Customization upgrades take time to be installed on the vehicle and have various effects. You should work on these customization often since they require so much time to get installed. Go for whatever is available, but if you have various things to choose from, go for those that help you play for longer and get better results (like increasing armor or rage meter fill-up).

When it comes to the Fuel and Armor upgrades, I personally prefer to focus on fuel first and Armor second: I buy 2 Fuel Upgrades, then 1 Armor and so on. Once you max them both, you can Evolve your car, which allows you to upgrade the Fuel and Armor even more. Do this as often as possible as well.

Weapon upgrades
The weapon upgrades are not kept throughout all game modes, unfortunately. The Turret mode, for example, doesn’t keep the Weapon upgrades of your car, which makes things a bit more difficult because Springs for upgrading weapons are pretty hard to come by. Therefore, I would suggest focusing on upgrading your weapon through the Guns menu mainly and keep the Turret mode upgrades for when you really have springs to spare. It will require a lot of upgrades to complete all the three missions anyway, so it’s better to put your Springs to better use.

Various Game modes
There are different game modes available in the game, each with their own energy meter and rewards. I personally prefer to focus on the Story mode since that unlocks many goodies, then go for the PvP Arena and Challenges, followed by Turret if I have time and the Daily Showdown at the end. I don’t really play a lot of the Daily Showdown because of a bug that always disconnects me from a race, so I don’t have much to gain from it at the moment. I am also pretty much satisfied with the goodies I get from all the other game modes not to care.

Here are a few tips and tricks for the various game modes in the game:

Story: Simply play to complete the missions. In most cases, the requirements are cumulative, meaning that you don’t have to meet the requirements in one go, but you can work on them on multiple runs. Take your time and play at your own pace, trying to get the most out of each race.

PvP Arena: A really fun mode because you play against other human opponents. The point here is to kill as many zombies or score as many points as possible, so driving carefully he is the key. A better car will obviously perform better, so work on those upgrades!

Challenges: A great mode for bagging some amazing rewards. The best thing about challenges is that the routes are always the same, so once you master them, you can get easy rewards in return. It requires a bit of practice, but it pays! In the challenges, it’s really useful to hit zombies in order to slow down and better control your vehicle.

Turret: This one is pretty easy and fun: you have to shoot as many zombies as possible. You won’t achieve too much until you have upgraded your weapon particularly for this game mode, but you can still play and usually complete the first two requirements without doing so. Apparently, getting headshots gives you more damage, so try to aim as good as possible. Also, when you see exploding stuff (like barrels) – focus fire on them in order to destroy all the zombies around.

Daily Showdown: As I said, I always get disconnected when playing this, so I haven’t focused on this game mode a lot. The main challenge here is to drive as far as possible, so make sure that you fill that rage meter at least once and use the zombie smashing in order to slow down when needed for tight turns.

Race tips
For most races, these things should come in handy. Keep them in mind and use them when needed:

– try to always collect the extra power-ups and goodies that sometime pop up along the way. These help you progress through the game a lot faster

– there’s no need to always buy ammo or use your weapon. Ammo is actually really expensive, especially early on in the game and you shouldn’t use too much of it. Instead just drive and get your points from there. But shooting the weapon helps you kill more zombies and increases your overall points and keeps the combo meter running, so if that is your focus, definitely activate the weapon as often as possible

– remember that your car accelerates as long as it doesn’t hit anything. So if you want to slow down (for example for some tight maneuvers), you should hit one or more zombies. This reduces your armor though, so in conclusion, if you want to drive as far as possible, you should try and avoid zombies, but if you want a lot of points, hit them by all means

– always look ahead to see what obstacles are coming. This is especially useful for when you have jumping ramps or for when you enter in rage mode: you don’t want to end up in a huge bus!

These would be, for now, our tips and tricks. If you have additional advice for fellow Guns Cars Zombies players, let us know by sharing your comments below.