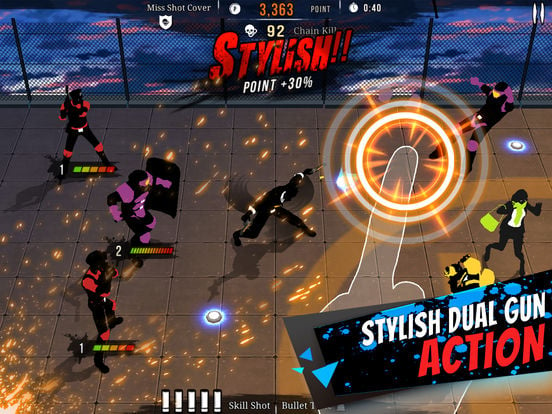 All of humanity’s greatest achievements have been destroyed. All that’s left is a dark and dreary future that is ruled by a military dictatorship. Gun Strider is a heavily stylized action game with slick graphics and addicting game play. You play as Ivan, a mysterious hero who’s bent on rebellion. This is twitch-action game play as it’s finest, as there is no movement or dodging; the only focus here is pure shooting! Tap on the enemies before they take you out! We’ve got some tips and tricks to make you a quick sharpshooter, so here’s our Gun Strider cheats, tips and tricks strategy guide!

If you’re confident enough in your own gun skills, then don’t worry about saving Bullet Time for when you’re in a pinch. Use it whenever you like! Shooting enemies during bullet time grants you triple the amount of points they normally give, so it’s a great way to get your score up. Just keep in mind that bullet time does not regenerate like your skill shots do – once you use it that it’s for the rest of the level.

2. Watch out for Skill Shot!

Skill shot will completely eradicate any side of the screen, including civilians! Be very careful when using skill shot – make sure you scan the side of the screen before you let off a round. You might end up blasting a poor civilian. Remember that shooting a civilian will temporarily stun your character, leaving more than enough time for an enemy to land a shot for you! Not only does your score lower and your combo break, you might even get a game over. Be very careful!

This is tip is ultimately up to you, but we recommend saving up for the “Unearned Income” upgrade first and foremost. Buying the first tier of this upgrade will increase the amount of gold you get by 5%. Each successive tier you buy increases it by another 5%. Buying this first will help you get the other upgrades much faster, which is why we prioritize this one first.

There are three different weapons you can buy in addition to the regular pistol. The M9 functions just like the regular pistol except it has a base power of +3, meaning that you can take out any early enemy in one shot without any power upgrades. The Bolt-19 has +2 power and adds an extra second onto your bullet time duration. The LMG-38 has +2 power and gives you a +5% gold bonus. You can probably guess, but we recommend using the LMG for the gold bonus.

5. Take out the weak guys first!

While it seems like your top targets should be the heavily armored guys, we think it’s the other way around. The heavy guys tend to be melee attackers, which means they won’t attack you until they slowly crawl up to you. This leaves plenty of time to deal with them, whereas the lighter guys all have guns. They only need a couple of seconds to ready their aim and fire. Since they go down in a couple of shots, you should try to aim for them first.

That’s all for Gun Strider. If you have any other tips or tricks to share, let us know in the comments below!