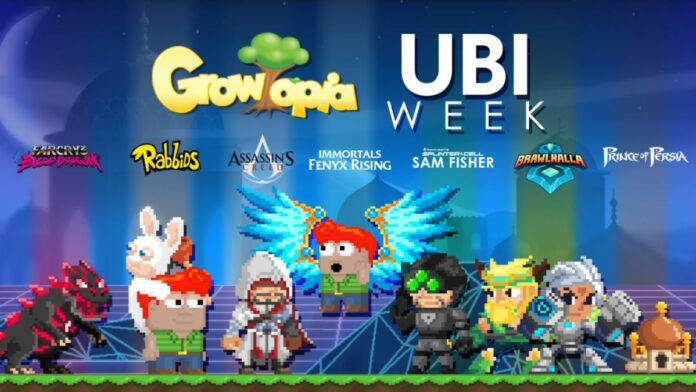 This article is sponsored by Growtopia

Growtopia, Ubisoft’s popular sandbox game for mobile and PC is getting a special seven-day event. It’s called UbiWeek, and it looks like a blast.

In case you’ve never played it, Growtopia is a colorful 2D MMO with the slogan Be Anyone & Create Anything. Those principles are evident in every pixel and every second of gameplay, as players take charge of a unique, procedurally generated world and make them their own.

The gameplay involves growing items from seeds that become trees, completing quests given by a weird and wonderful cast of NPCs, and zipping over to other players’ worlds to socialize and make mischief. The possibilities are pretty much endless.

Throughout the UbiWeek event, Growtopia will host a crossover with a different Ubisoft game every day for seven days. Those games include Assassin’s Creed, Far Cry III: Blood Dragon, Rabbids, and more.

As a result, for one glorious week you’ll have the chance to rub shoulders with characters like Sam Fisher and Ezio, make use of iconic items, and experience visual elements from some of the most acclaimed and recognisable franchises in gaming.

For example, the Prince of Persia event will turn your Growtopia world into a cute facsimile of the world in the Sands of Time, with a range of backdrops from the game and parallax scrolling.

The Rabbids crossover, meanwhile, will see you carrying a plunger-wielding Rabbid around on your back, while the Assassin’s Creed event will turn you into the nimble Ezio, with special movement states for walking, jumping, and falling.

In Tom Clancy’s Splinter Cell event, you will have the chance to fully transform your character into everyone’s favourite elite field operative, Sam Fisher. With this iconic outfit, you’ll be the sneakiest agent in all of Growtopia.

The Immortals Fenyx Rising crossover will see you equipped with the Wings of Daidalos on your back. Then there’s the Far Cry III: Blood Dragon event which gives you your very own pet Blood Dragon that follows you around shooting lasers from its eyes – and the Brawlhalla one gives you a gigantic battle hammer or silver gauntlets, depending on the transformation path you choose: Bödvar or Val.

To enjoy this spectacle, download Growtopia right now on iOS or Android. The UbiWeek event runs from the 24th until the 30th of January.