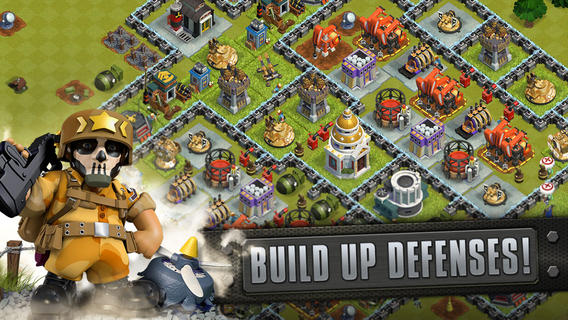 Real time strategy games have been quite successful in the past, as some older PC gamers surely remember. Even though not many of these games are developed nowadays on consoles and PCs, a few teams are still working on these kind of games and release them on the App Store.

GREE has recently announced that a new free to play real time startegic game will be released before the end of the month on iPhone and iPad. Call To Arms is going to feature a cute art style, as expected from a GREE game, but that doesn’t mean that the game is going to be easy or lack any real depth.

Call To Arms will allow gamers to approach its challenges in a variety of ways. Players wanting to be aggressive and constantly develop and upgrade their troops will be able to do so as quickly as possible. At the same time you can just focus on building stuff and ally yourself with other players.

For the rest, the game is going to feature everthing that RTS fans look for in their games: resource harvesting, base building, technology research and more. The game also sports some unique features that set it slightly apart from many other games of the genre: in Call To Arms an unconventional strategy is going to work just like a conventional one, giving players the possibility to experiment with the game’s many features.

Call To Arms will be available for download on the App Store before the end of the month. The GREE developed game is going to be a free to play title.