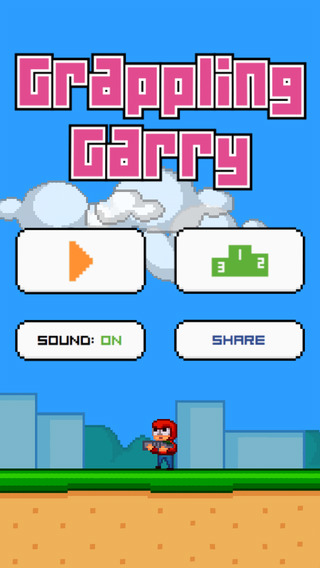 Garry has a long way to go, so help him climb sky high! Grappling Garry is a simple but challenging one-touch game where you need to direct Garry into the sky. Grapple onto the hook and avoid the bombs! We’ll help you score sky high with our Grappling Garry cheats, tips and tricks strategy guide!

1. You have a small window of time to choose your next grappling hook!

It’s a little deceiving because of the advertisement placement, but after a hook is destroyed after you grapple off of it, Garry has about two seconds before he falls completely off screen. You can actually use this to your advantage, such as situations where the mines are in unfavorable positions above you. You can wait a little bit to let the mines space out, then you’re clear to launch!

2. You can grapple backwards!

Another trick to keep in mind is that you don’t always have to grapple higher! If you need to, you can grapple below you too. This is really useful in cases where you jump the gun and try to rush for a hook only to find out that there’s a mine headed right for you. You can quickly switch it up by going down, then back up again on a different hook!

It’s important to keep in mind that the hooks don’t actually deactivate until Garry collides with them. If you grapple to one hook and switch to another one before Garry reaches it, the hook will stay activate and can be used again. Much like the second tip, this is really handy for making a split-second-last-minute-decision in case you misjudge the timing of a mine!

4. Try to keep your eyes moving from the top of the screen to where Garry is!

Keeping your eyes moving is key to getting a high score in this game. Most of the time, you want to keep your eyes trained near the top of the screen so that you can watch to see what’s coming up. Every now and then, you should also keep your eyes on Garry himself, especially if you’re doing some tight maneuvering. If you come to a row that has two or more mines, it’s best to watch Garry so that you can be precise with your movements.

There are several multiplier bonuses that you can get to increase your score. One of them is a the near miss bonus, which you get when you just barely slip past a mine. You also get a bonus when you pass rows with multiple mines. If you like to play dangerously, it’s a great way to rack up the points!

That’s all we can share for now. This game is a lot like Flappy Bird in its simple but challenging nature, so you’ll get better with practice! If you have any other questions or suggestions, leave a comment below!