Grand Summoners has received many updates over the past years, and the game’s roster has grown a considerable amount. Grand Summoners now features crossover characters from different game and anime franchises, to the delight of many. With so many characters, how do you know which ones are the strongest? We’ve compiled a list of what the community thinks are the most powerful characters in the game right now. Let’s get started with our Grand Summoners best units guide!

Awoken Cestina is the go-to boss killer with her Giant Boss Killer passive ability. Her true art Trois Desastres deal extreme earth damage, and it also increases the party’s physical damage and weakens enemies, allowing for the whole group to get in on the fun.

Awoken Thetis is a stellar tank with high critical resistance and a plethora of support options for the team. He can take damage in their place and increase their break power. His water damaging arts are pretty good too.

Awoken Juno is a light attacker that excels with a team full of Demon-type units. She gets powered up for every Demon on the team, and her true art Schwarzdorn Aufstand activates a special buff called Demonic True Eclipse. While DTE is active, Juno’s DMG and accuracy is increased by 100%, making her very scary in this state.

Mako Mankanshoku (AWK) is a crossover character from the anime Kill La Kill. In Grand Summoners, she’s one of the best support units in the game. She innately takes less physical damage, and she can buff and heal her allies like no one else can.

Awoken Norn (AWK) is a sub-attacker that excels at buffing Machine-type units. Machine Enhancement increases the stats of all Machine units in the party, and her arts do great damage and fill up allies’ arts gauge.

Emilia (AWK) is another anime crossover character from Re:Zero. Emilia is a sub-attacker with high resistance to seal and freeze status effects. Her arts deal huge amounts of water damage and Forest of Ice has a high chance of causing ultimate freeze.

Rimuru(AWK) is, once again, another anime crossover character. Rimuru is a supporter with high fire resistance and gains arts gauge naturally over time. Full-Potion heals and cures allies of status effects and fills their skill gauge, while Predator deals great water damage and increases the stats of the team by 30%.

Asirpa (AWK) is a – you guessed it – anime crossover character. Asirpa is a supporter who focuses on speeding up her allies’ skill and equipment CTs, while also healing them and increasing their arts gauge.

Priestess (AWK) is a healer anime crossover character. She has high poison resistance and can negate some damage directed towards her allies with Protection. Protection also boosts her healing, which can be combined with her Minor Heal skill.

Spy of Darkness Fen is a dark sub-attacker who can deal amazing damage towards blinded enemies. Sniper Skill “Dark Abyss” has a high chance of inflicting blind, and it also increases Dark units’ arts gauge. His damage bonus allows him to pick off blinded targets very quickly.

These are, as of writing, considered to be some of the best units in all of Grand Summoners. Think another character should be on this list? Let us know in the comments below! 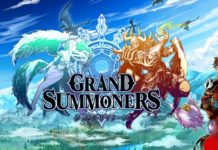