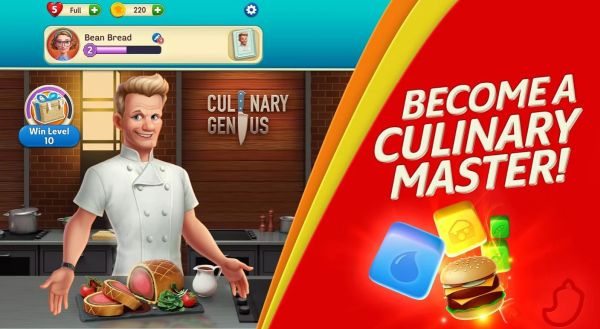 Gordon Ramsay: Chef Blast is the latest puzzle game by Outplay Entertainment. Because if there’s a Chef with a mobile game(s) to his name, that has to be Gordon Ramsay right?

If you are a Gordon Ramsay fan it will come as no surprise to you how a Culinary Puzzle Game can be rated T (for language of course, what else). For the rest who might be scratching their heads as to how is that possible, you’ll get a glimpse of Gordon’s charming personality through this game.

Each stage offers a different kind of challenge but the idea is always the same. You have a set number of moves and a goal that you need to reach every time.

You can match a minimum of two cubes of the same color per move. Matching a greater number of cubes per move will give you some special items to help you clear the stage much faster and easier.

Matching five cubes of the same color will earn you a Rocket. Tapping on a Rocket will destroy a whole line or column.

Matching seven cubes of the same color will earn you a Bomb. Tapping on a Bomb will cause an explosion that will destroy every cube in an area.

Matching ten cubes of the same color will earn you a Chili. Tapping on a Chili will destroy every cube of the matching color.

This is not all though. You can use combinations to trigger even bigger explosions. For example: Combine a Chili (let’s say of yellow color) with a bomb. That will cause every yellow cube to turn into a bomb. Another example: Combine a Chili ( let’s say a green one) with a Rocket. That will cause every green cube to turn into a rocket. You get the idea right?

Combine two Bombs and it will result in a much bigger Bomb which will trigger an ever bigger explosion!

Combine a Rocket with a Bomb and it will trigger an explosion of twelve Rockets in total. Three Rockets on every direction.

Combine two Chilies and it will result in a multicolor Chili that will clear every cube.

As every great Chef of course you have a set of kitchen tools that can help you clear each stage much faster.

Hammer: Use it to break any Cube that you want.

Peeler: Use the peeler to break whole columns!

Knife: Use the knife to break whole rows!

Mixer: Use the mixer to shuffle all the cubes.

Using any of these tools won’t affect the remaining Moves that you have left to clear a stage.

Now this is what makes this Puzzle game unique. By completing Recipe Challenges you’ll be rewarded with Gordon’s amazing recipes of his favorite dishes. To Ramsay’s fans it will come as no surprise that the first Recipe Challenge reward is his all time favorite Beef Wellington!

By playing Chef Blast you can create your own Gordon Ramsay’s cookbook. That should be a good enough reason to try out this game if you like this type of games.