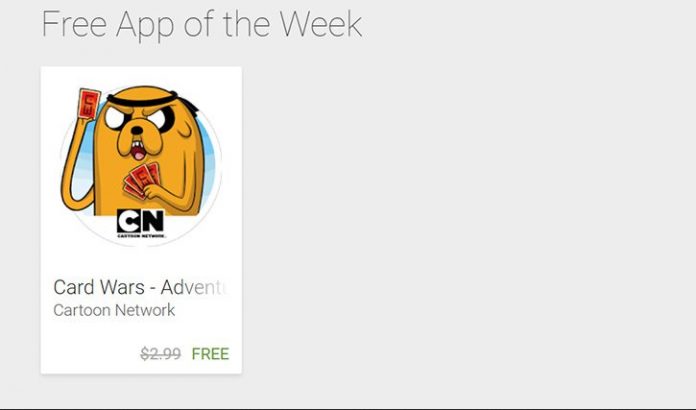 In pure Apple-fashion, Google decided to treat its Android users with a great addition: Google Play now features a “Free App of the Week” section. Just as the name suggests, that will be the place where a top Android application or game will be offered as a free download for a week.

However, the good news is not entirely good. Right now, it seems that the new Free App of the Week category is only available in the US (you can check it out here). Hopefully and most likely it will be rolled out to the entire world soon.

We believe that will be the case because the first app in the Free App of the Week category, Card Wars – Adventure Time, is available worldwide for the discounted price of zilch. So in the end, even though the category itself won’t be available worldwide, the free app of the week on Android will and that is all that matters.

Apple is running on its Play Store the free app of the week promotion for quite a while now and Google also had a similar promotion back in 2015, but was cancelled for some reason. Hopefully this time it is here to stay.

The introduction of the new Free App of the Week on Android is marked with a really nice release, as I already mentioned: Card Wars – Adventure Time can be downloaded for a limited time for free, while its regular price is a hefty $2.99. Since this is a great game to play, it’s worth the download.

And now we can only hope that Google sticks to its plans and keeps this promo running for the years to come. Because, in the end, who doesn’t like premium apps offered for free?