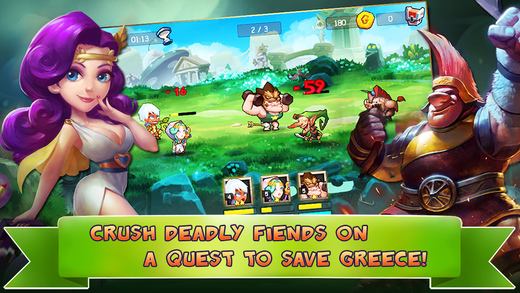 Gods Rush is a really nice role playing game now available for free on the App Store. If this mythological journey is proving too much for you, you have come to the right place, as this Gods Rush Cheats: Tips and Tricks guide will provide some useful insights on the game’s mechanics, allowing players to get more out of this interesting role playing games.

As in other role playing games, in Gods Rush players will have to power up their characters by defeating enemies and acquiring experience points. In Gods Rush, it’s also possible to level up characters by giving them Wisdom Potions, which are earned after winning battles and from sweeping stages. The only way to sweep stages is by going to a previously completed one and use sweeping tokens.

Items also come into play for ascending and evolving characters. While ascending simply requires a certain number of hero shards, evolving requires filling the character’s six equipment slots. The best way to gather the equipment needed to evolve characters is to sweep already completed stages. Sweeping Elite stages is even better, since it will allow players to obtain rarer equipment.

Being a free to play game, the team behind Gods Rush wants players to come back to the game every day. Thankfully, there are some incentives for doing so, thanks to the Aphrodite Spring which gives players free items after set intervals. Every 48 hours the Spring will also give players a free hero so make sure to keep checking it every day to reap some really nice rewards.