While Niantic is busy working on Harry Potter: Wizards Unite, leaving games convinced that they’re going to receive a Pokemon Go clone set in a different world, Go Adventure is silently preparing to take the world by storm.

A location-based RPG that can be easily described as “Pokemon Go meets Final Fantasy,” Go Adventure challenges you to collect creatures known as Datamon, form a party (or go solo) and battle with your Datamon against other human players, craft new items and claim territories for your team.

In other words, it sounds like how Pokemon Go should’ve been, but unfortunately isn’t. Let’s just hope that it will live up to the expectations and deliver all the goods without going through the wrongs of Niantic’s game.

Of course, Go Adventure has its own identity, despite the “Go” in the title or the “mon” suffixed characters. Apart from a really nice, retro art style, it offers some extremely solid features and options.

For example, when meeting a Datamon around your area, you will have the option to attack the creature and get a random reward if you succeed in defeating it; copy it with your Action Points in order to have it in your own party; break it with AP to turn it into useful materials for crafting or Destroy it with AP in order to gain some more experience. 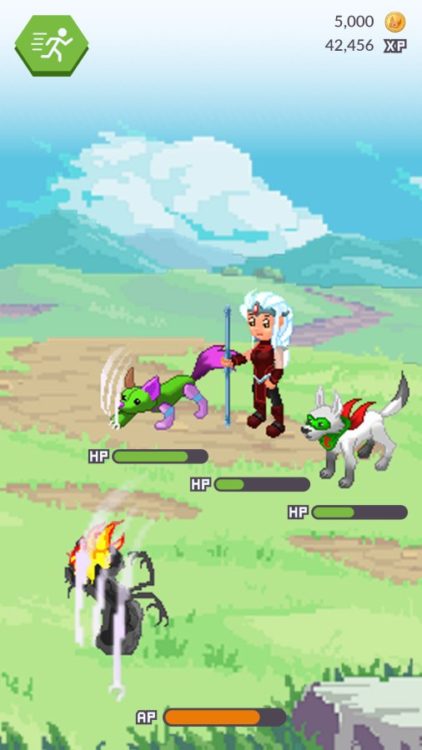 Combat is an important part of the game too. Similar to the classic RPGs like Final Fantasy VI, your main character will go into battle flanked by two Datamon of your choice and battle it all out against other players or the AI in turn based combat. You will be able to evolve your Datamon in battle, upgrade their skills and so on in order to turn the tides and win.

You can even create or join a team made of other players and claim territories in your city or help defend them against invaders. And apparently you won’t have to do just as much walking around as you can easily control your character’s movement around the city from the comfort of your home or office using the virtual joystick on the screen.

Go Adventure looks like a promising title which does a lot of things that we would’ve liked Pokemon Go to do. The game’s also on Kickstarter right now if you feel like giving the developers a head start into battle and you can also learn a lot more about the game there. So make sure you check it out before it comes out on Android and iOS.