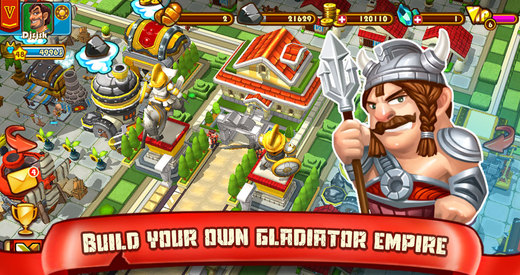 Are you ready to build your own unique roman empire? Let’s begin with the ultimate Gladiators: Call of Arena cheats, tips and tricks strategy guide.

Like every other city building game, there is a main questline that you should follow. As you complete them, you will naturally progress your city so that it is upgraded and efficient, and can hold a lot of gladiators. Make sure you collect the rewards though, as they are worth hefty amounts of fame, which is this game’s version of experience points!

2. Make sure to collect the achievements too!

There’s a trophy button at the bottom left. These are your achievements, various feats you can accomplish over your playtime. These act exactly like quests, so make sure you check these to collect the rewards you get from them. These often have gems, the premium currency, as rewards, so it’s very important to check them!

In the beginning, Gladiators come in three different flavors:

Since you can only take three gladiators into a fight with you, I find it best that you have one of each type. You can have your shield gladiator take the frontlines absorbing all the hits, while your dual sword and spear gladiators pick off the distracted enemies. As you progress, you will be able to unlock more kinds of gladiators!

To me, it helps to have all three of your gladiators focus one target during battle. I think it’s better to bring down individual targets as fast as you can rather than have everyone fight their own target, as it’ll drastically decrease the amount of damage your overall force is taking. Don’t forget about their skills too, as they can really put the hurt on when you use them!

5. Research new upgrades in the mansion!

Technology upgrades grant passive bonuses to your gladiators and your city. You can get increased capacities, higher aureus yield, new gladiator types, and more, so always check to see what technology researches you can afford. Do note that you will also need to upgrade your mansion in order to unlock the higher level buildings, as they have to be equal to your mansion’s current level and cannot go any higher than it.

6. Need extra aureus and fame? Perform in the Theater!

If you’re strapped for aureus or you’re just a couple fame away from leveling up, you have your gladiators perform in the theater for some loose change. The rewards aren’t very high but it doesn’t cost anything but your gladiators’ energy to perform.

7. Be sure to set up your Combat Ground to defend yourself!

You have the option of attacking other players to steal their resources and loot! That is, if you’re able to beat their gladiators! If you tap on your Combat Grounds, you can set up to three gladiators who will protect your city if another player attempts to attack. Don’t worry about your gladiators, as this does not expend any of their resources, like their energy. Be sure to set your strongest three to scare off would be attackers! Speaking of which…

8. Keep your gladiator’s equipment up to speed!

9. Look for the gladiators with the most potential!

To end, we’ll leave you with a tip about hiring new gladiators. When you go to the tavern, you’ll see the potential hires. You’ll see their type, a small little blurb about their personality, and a rank. The ranks go from E being the worst, all the way to LEG, for legendary being the best. Pick the highest rank there, or if they’re all pretty bad, wait for a refresh. Their personality blurb also tells you how well they can adapt and how much potential they have. The better these values are, the more aureus they’ll produce and the faster they’ll level up.