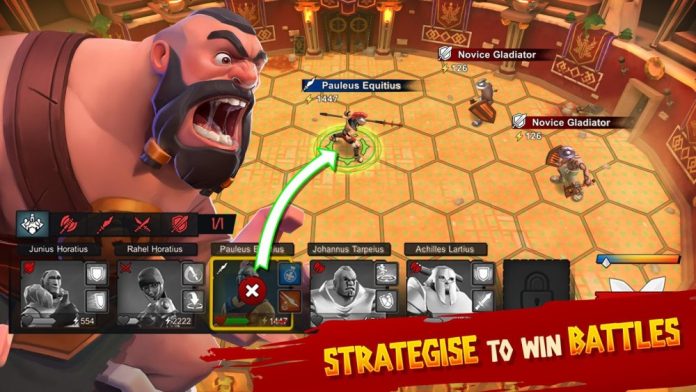 Gladiator Heroes is a really interesting and extremely challenging game for Android and iOS, mixing base building with deep strategic combat. You get cool looking gladiators that you can own, train and send to combat, plus a lot of other things to care about. And we’ll talk about them all here in our complete Gladiator Heroes strategy guide where we’ll share with you some Gladiator Heroes cheats and tips to help you win all battles.

Things are really difficult in this game, as you probably know already, so we shouldn’t waste any time! Let’s get going and let’s check out below some Gladiator Heroes tips and tricks to build the perfect band of gladiators!

How to unlock PvP (Games of Glory)
There is a PvP element in the game and it is that which makes this game so much fun! All you have to do in order to unlock PvP in the game is to reach level six with your player and you will automatically unlock the “Games of Glory” which are the name the game offers to player versus player combat.

Train first, level up later
Apart from the natural experience gains your Gladiators enjoy during combat, you can also train them up to five times in order to max out their power and make them stronger. There are two extremely important things to consider here:

1. It’s a lot cheaper to train your gladiator five times BEFORE leveling them up. As their level increases, so does the price for a training session.

2. Keep training them after you max them out and keep them at 5 training bars. Every couple of days, your Gladiator will lose one training star, so you should keep an eye on them and make sure they never drop below 4 in order to keep them in maximum shape AND keep your training costs as low as possible.

Watch Ads to open more chests
Especially when there are rarer rewards and you haven’t guessed the chests they’re hiding in, you should take advantage of the option to watch an ad for a shot of opening 3 extra chests after successfully completing a battle.

Scour the map for treasure chests
On the missions map, you will see treasure chests popping up every now and then: tap these chest and you will win some much needed free currency! They seem to refresh every several hours, so don’t forget to look for them often – even in areas you haven’t unlocked yet.

Always work on upgrading something
You can only upgrade or build one building at a time, and you should make sure to always have your people working on that. It’s easy to spot buildings that can be upgraded as they have a sign with a green arrow near them.

But you should also be constantly working on making your gladiators better: if you have injured gladiators, make sure you work on healing them. At the same time, train a different gladiator or level them up. It’s important to take advantage of all the spots you have open because otherwise the road ahead will be long and difficult.

Unlocking more gladiators
The rarity of the Gladiators you receive is determined by the type of Statue you use when unlocking them – the more expensive the statue, the better the star rating. You can’t increase the star rating of a gladiator AFTER unlocking them, so it’s in your best interest to try and get the rarer ones as soon as possible because they will grow up to be stronger than regular ones. You will also get Statues as you play the game, but your best bet is to save your gems early on for a Silver Statue – which is easily done. If you want to spend a bit of real money or wait for a longer period of time, you will eventually hoard enough for a gold statue which guarantees a 5 star gladiator.

There are also multiple gladiator types in the game, each with its own strengths and weaknesses and you unlock each type by progressing through the game, although you have no way of getting a specific type when you use a statue:

Sword and shield gladiators: These have high defensive ratings and they can block incoming attacks. They are good all-around Heroes and you will start the game with one in this category
Two handed gladiators: heavy, aimed at dealing damage to multiple enemies around them, these can’t be pushed back and deal a ton of damage. They also have the highest health in the game and good skills to take advantage of that.
Dual Weapon Gladiators: They are the only gladiator type that attacks twice. This makes them a force to always fear and bring into your team if you have them.
Spear Gladiators: Although they don’t get any bonuses in any of their stat meters, they are really solid fighters who attack from a distance, then retreat to a safe place. They’re really useful in battle as well!

How to win battles in Gladiator Heroes
It’s usually a matter of having the strongest team in the arena, as you don’t have a direct control over the movement of your gladiators, nor the targets they choose with the regular attacks. However, you have control over the initial placement of the gladiators and you can select what skills to use and when to do this. Although not much, you can use this to your own advantage: place your gladiators close together but in such a way that you open up the door for one to attack an enemy from the back as this does a ton of damage.

Also, use the special skills of your gladiators in such a way that you get the most of them. Usually, it’s skills that prevent the enemies to inflict damage that are the most useful: Sun, Block and anything like that can give you the upper hand in battle, especially if you target the toughest enemy with that skill.

This would be it, for now, in terms of tips and tricks for Gladiator Heroes. If you have other suggestions for fellow players, share them in the comment section below.