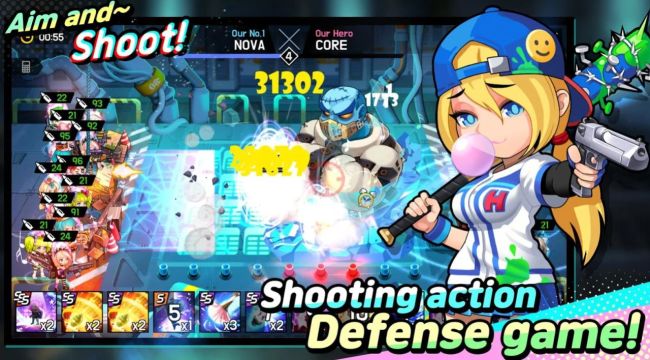 In today’s article we are going to cover all of the Girl’s War Z tips and cheats to help you get more powerful and defeat all the zombies which are coming your way!

There are plenty of zombie games out there, but none of them looking quite as cute as this one (with one exception, Plants vs Zombies maybe). Well, if you ever thought about having a squad full of cute girls wielding powerful weapons and taking down zombie after zombie, then it’s all come true in Girl’s War Z!

This is, in my opinion one of the more exciting and unique games featuring zombies which I have seen, so without further ado, let’s dive right into the Girl’s War Z tips and tricks right here below and help you defeat more zombie waves!

Use the skills carefully

The skills have limited uses, and each of the heroes will have one skill. You can check out the skills in the bottom left side of the screen, and you should make sure that you always cast them at the right time, because you will be able to only use them a few times!

Once you have used up all of the tries for the skills, the skill will get grayed out and unable to be used. Therefore I suggest that you think carefully before using them and not waste them on a single enemy, but rather or multiple enemies at once – and also not at the same time as another skill.

My tip here: I always prefer to use only one skill per wave, or at most two, because apart from the skills, the girls will be able to use normal bullets which can do either AoE damage or single target damage.

Depending on the type of gun that a girl has equipped, it will have a different range at which it can attack the enemy. The Sniper guns will be able to attack enemies that are very far away, while there are other weapons which can only target enemies when they get close to the barricade.

In my opinion you should check out the weapons in the Student -> Guns tab and there you can tap on a weapon and then press the small “i” button in the upper right corner of that weapon icon. That new window will show you the Shooting Distance along with other stats which define that weapon.

While there are 5 types of weapons in the game, they all have different overall stats – for example, Sniper Rifles will have the highest range (12), and some Shotguns the shortest (5.5). Read these carefully and make sure that you are equipping them to the girls who specialize in that weapon type.

If you would like to acquire some free loot, there there are plenty of ways to do so, but the easiest one which you should not miss out as soon as you start the game is this one:

Claim free Red Gems from the Inbox! When you head on to the Inbox -> Notice tab you will see two sections – Update and Notice. If you scroll all the way to the bottom in both of these sections you will be able to claim free Red Gems! Do this ASAP because they will be a useful currency.

Complete the in game missions

There will be several in game missions which you can try to follow and complete, and receive tons of useful rewards in return. These missions should act as your guiding lines for what you should do next in the game, and you can find them in the main game interface on the left side of the screen. There you will spot this girl wearing red glasses, and if you tap on her you can read the missions.

Once you have completed a mission, you can claim the rewards given out and then move on to the next mission! I suggest that you do this whenever you are either running low on resources, or if you want to progress following the game’s way. Either way, even if you play the game your own way, you should still do the missions because the rewards will be useful and let you summon more girls in the long run.

Try to do as many Achievements as possible

You can find the in game achievements in the right side of the screen, and there are quite a lot of them. Try to give them a quick read and then remember some of the tasks that they ask you to complete and try to do them.

The Achievements are a very good way to collect a ton of Red Gems because some of the tasks will reward you with even 100 Red Gems at a time, depending on the difficulty, so I definitely think that it’s a good way to make resources in the game.

If you want to have a much easier time defeating zombies, then this one small detail will definitely make a big difference. When you go to the Student tab, you will be able to see your students (girls) there. Tap on any one of your choice, and you will notice in the window which will pop up that there will be quite a few stats for each one of them.

By checking in the Gun Mastery tab you can see how good they are at using various weapons. Always try to equip them with the weapon which they have mastered the most, because that will make them deal more damage and use the weapon to the best extent.

I would argue that it’s much better to just equip any weapon and when you have the possibility to switch it for a better one, to do it.

Always equip the best weapons to the best girls!

This will let you maximize their power because it will let them deal more damage. In my opinion you should always use the best weapons you have to the SS girls (or any of the highest girls you have) because they naturally have better damage and stats and if they also are paired with a good weapon, then it will be much easier for you.

In my opinion a very good thing which you can do is tap on the girl which you want to swap the weapon and then select the Auto Equip option. This will let you automatically change the weapon for the best available one.

If you want to acquire more girls, then the easiest way to do so is by heading on to the Black Market -> Black Market -> Summon. There you will have multiple options to choose from, and I definitely suggest that you try to summon as much as you can until all of the girls in your team are SSS (eventually).

The very first option you can do every 4 hours, so try to do this every day multiple times and not miss it. The second one will let you use your Red Gems to summon one single girl, but if I was you I wouldn’t focus on spending 220 Gems like that.

Instead, you should try to get the third option which lets you summon 11 students for 2200 Gems. This will also give you a student S+ guaranteed, so it’s the best option there is in my opinion.

Also, when you gathered enough fragments (10) you can get a SS student guaranteed, but that will take time and completing quite a few Achievements and missions.

Get more Guns (and better!)

If you want to get some of the best weapons in the game, then you can do that by heading on to the Black Market -> Black Market -> Gun tab. There you will have several weapons lined up, and you can obtain the SSS version of all of them pretty easy!

Firstly you should make sure that you watch an advertisement and claim free Guns, because that is super easy and it will only take a few seconds! But if you managed to save Gold, then the best you can do is try to acquire SSS weapons.

My tip here: If you have enough Gold, then try to Exchange until the weapon is SSS grade (highest) and try to look on the list on the right side which has the stats. That will show you the max stats – always try to get weapons which have stats closest to that.

These rewards will give you a free SSS girl on day 15, so it’s super useful and an easy way to get your very first SSS char if you haven’t got it yet.

These would be all of our Girl’s War Z tips and tricks that we have for you right now! Do you know some more useful game tips and strategies to defeat the zombies? Feel free to share them with us and the other players down in the comments section below!