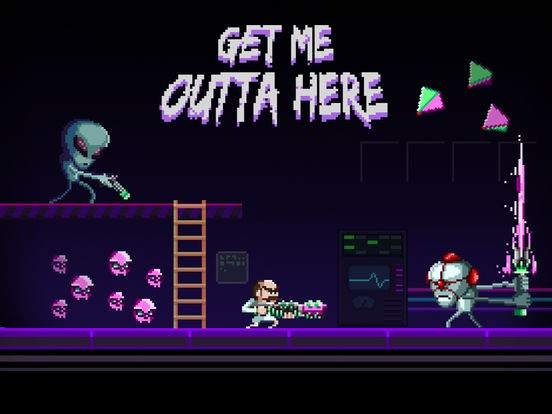 A humble farmer has been abducted by aliens and it’s up to you to guide him to safety! Get Me Outta Here is a simple run-and-gun platformer with a lot of retro flair. Due to a slightly incompetent strike team, you’ll need to constantly wipe out aliens to prove that it’s safe enough for an evacuation. You’ve only got two and a half minutes between each round to do it, so be snappy! We’re here to help you survive the alien onslaught, so here’s our Get Me Outta Here cheats, tips and tricks strategy guide!

1. Spread your kills out!

There’s an in-game tip that tells you to spread your kills out to ensure you maintain your combo. How do you do this, exactly? As backwards as this sounds, try not to kill everything in sight. You’ll always want to leave at least one enemy around as a safety net in case you can’t find anything else to kill.

Good enemies to leave lying around are those little floating prism guys and the little alien bugs. These guys spawn in numbers and have low health, making them quick kills. Just be careful not to let too many of the prism guys bunch up, as they can get kind of annoying after a while since they can shoot bullets at you.

With this strategy, you will always ensure that you have at least one backup kill to maintain your combo. Wait until the combo counter on the left starts blinking – that means it’s about to expire. Swiftly kill a nearby enemy to reset the timer, and continue the carnage!

At the top left and right corners of the spaceship, you’ll see chutes. These chutes will periodically drop crates down onto the platform. Shooting them will break them open revealing a random power up inside. These power ups are a great boon to your success, so make sure you pace back and forth across the ship every now and then to see if any new crates have spawned.

Running around in a big loop is usually the best route. Occasionally you’ll find crates with a giant skull on these. Shooting these crates will cause a massive explosion, heavily damaging any enemies caught in the blast. Be sure not to stand too close yourself!

Some notable power ups include:

And with that, you should have completed the main story of Get Me Outta Here! Congratulations! Now you can hone your combo skills in the endless mode and other fun modes. If you have any other tips or tricks to share, let us know in the comments below!