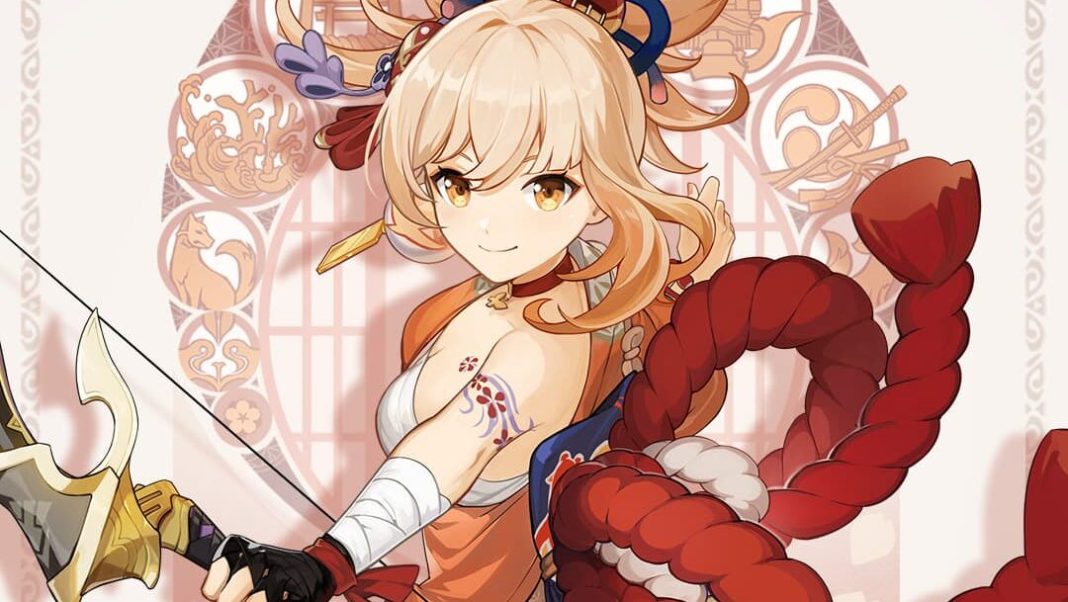 Yoimiya is one of the few confirmed Inazuma playable characters in Genshin Impact. She is a five-star Pyro user whose weapon of choice is a bow. Despite not having an official confirmed release date, players can expect Yoimiya, Sayu, and Ayaka to be the next in line to join the current roster of characters starting Genshin Impact 1.7 update.

In this article, we will share details on Yoimiya’s elemental skill and burst attacks, her constellations, and basic information on her. So without any further ado, let us move on to the main article.

Yoimiya is the owner of the Naganohara Fireworks and an expert craftsman of creating Fireworks. She is also known as Queen of Summer Festival. Here are the basic details on her that you should know about.

Here is everything you need to know about Yoimiya’s Passive Talents.

When Yoimiya crafts Decoration, Ornaments, and Landscape-type Furnishings, she has a 100 percent chance to refund a portion of the materials used.

Tricks of the Trouble-Maker

[Unlocked at Ascension 1] During Teika Fire-Dance, hits with Yoimiya’s Normal Attack will increase her Pyro Damage Bonus by 2 percent. This effect lasts for three seconds and can have a maximum of 10 stacks.

[Unlocked at Ascension 4] Using Ryukin Saxifrage causes nearby party members (not including Yoimiya) to gain a 10 percent Attack Increase for 15 seconds. Additionally, a further Attack Bonus will be added based on the number of “Tricks of Trouble Maker” stacks Yoimiya possesses when using Ryukin Saxifrage. Each stack increases this Attack Bonus by one percent.

Here is everything you need to know about Yoimiya’s Elemental Skill and Elemental Burst attacks.

With a flourish of incense fireworks, a ring of saltpeter surrounds Yoimiya.

During this time, arrows fired by Yoimiya’s Normal Attack will be Blazing Arrows, and their damage will be increased and converted to Pyro Damage. The second Level Charge of Normal Attack: Firework Flare-Up will not generate Kindling Arrows during this time.

This effect will deactivate when Yoimiya leaves the field.

As her original creation, the “Ryukin Saxifrage” leaps into the sky. Yoimiya fires forth blazing rockets bursting with surprises that deal Area of Effect Pyro Damage and mark one of the hit opponents with Aurous Blaze.

All Normal/Charged/Plunging Attacks, Elemental Skill, and Elemental Burst by any party member other than Yoimiya that hit an opponent marked by Aurous Blaze will trigger explosions, dealing Area of Effect Pyro Damage.

When an opponent affected by Aurous Blaze is defeated during the skill’s duration, the effect will pass on to another nearby opponent, who will inherit the remaining duration.

Here is everything you need to know about Yoimiya’s Constellations.

The Aurous Blaze created by Ryukin Saxifrage lasts for an extra four seconds. Additionally, when opponents affected by Aurous Blaze is defeated within its duration, Yoimiya’s Attack is increased by 20 percent for 20 seconds.

Constellation Lv. 2: A Procession of bonfires

When Yoimiya’s Pyro Damage causes a Critical Hit, she will gain an additional 25 percent Pyro Damage bonus for the next six seconds. This effect can be triggered when Yoimiya is not the active character.

Increases the Level of Teika Fire-Dance by 3. Maximum upgrade level is 15.

When Yoimiya’s own Aurous Blaze triggers an explosion, Teika Fire-Dance’s Cooldown is decreased by one second.

Increases the Level of Ryukin Saxifrage by 3. Maximum upgrade level is 15.

During Teika Fire-Dance, when Yoimiya’s Normal Attacks, have a 40 percent chance of firing an extra Blazing Arrow that deals 50 percent of its Original Damage. This Damage is considering Normal Attack Damage.