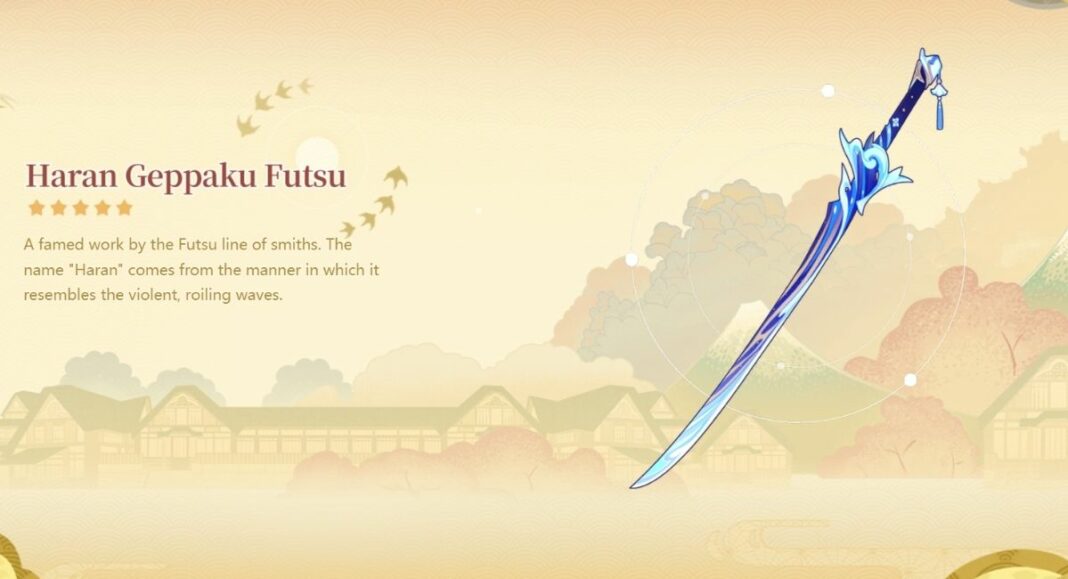 The Haran Geppaku Futsu is a five-star sword-type weapon in Genshin Impact that serves as the featured weapon for the playable character, Kamisato Ayato.

It is a great DPS weapon that you can use on any other DPS unit as it greatly increases the ATK and CRIT Rate of any character. Moreover, the weapon skill Horned Flow increases Elemental Damage.

In this Genshin Impact guide, we share every detail on Haran Geppaku Futsu Sword stats, skill, and how you to get it.

Here are the stats for the Haran Geppaku Futsu sword, the featured weapon for Kamisato Ayato:

Like every other weapon in Genshin Impact, the Haran Geppaku Futsu sword comes with a special ability called Horned Flow that has the following effects: 12% All Elemental DMG Bonus.

Related | Genshin Impact Vermillion Hereafter Artifact Set Bonus, Stats, and How to Get

When other nearby party members use Elemental Skills, the character equipping this weapon will gain 1 Wavespike stack. Max 2 stacks. This effect can be triggered once every 0.3s.

When the character equipping this weapon uses an Elemental Skill, all stacks of Wavespike will be consumed to gain Rippling Upheaval: each stack of Wavespike consumed will increase Normal Attack DMG by 20% for 8s.

How to Get Haran Geppaku Futsu Sword

You can get the Haran Geppaku Futsu sword from the Epitome Invocation banner that will go live on March 30, 2022, along with the version 2.6 update.

Related | How to Destroy Bedrock Key in Genshin Impact