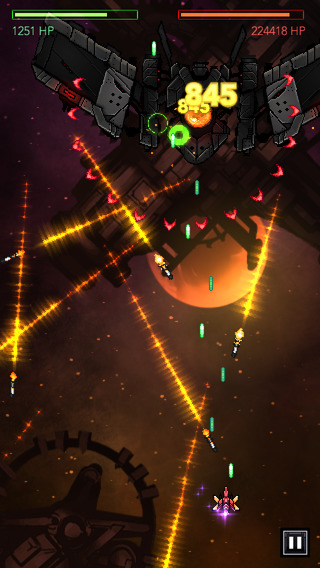 As an ace pilot who’s been asleep in cryostasis for far too long, it’s about time you get some action. Gemini Strike is an arcade shoot-em-up that tasks you with blasting your way through enemy ships, dodging asteroids and other space debris, and facing off against giant bosses. We’ll help you get through this action packed adventure with our Gemini Strike cheats, tips and tricks strategy guide.

A mobile target is harder to hit as opposed to a sitting duck! That said, make sure that you don’t move around too fast. Remember that your ship is controlled directly by where you tap, meaning that your ship will be obstructed at all times by your own finger. Always try to predict where bullets are going to go when you’re moving around, so that you don’t run into a bullet you couldn’t see.

Reactors are one-time use special weapons that are multicolored. Each color does something differently!

Remember that you can only hold one reactor at a time. If you pick up another one, it’ll replace your current reactor. Everytime I see a new reactor floating around, I use my current one just so that it doesn’t go to waste.

After you clear the first sector, you’ll unlock secret missions. Occasionally, your star map button will flash with a exclamation mark over it. This will alert you that a previously cleared sector has an available mission to undertake. The missions will vary slightly, but it is almost guaranteed that you’ll be getting better loot than normal. It’s important to note though that you only have one shot at clearing these; dying on the mission will cancel the contract and the mission will disappear. Be on guard, as these missions are harder than usual too!

4. Watch out for debris!

Early on you’ll encounter asteroids. They will come hurtling down from the top the screen, and they cannot be destroyed, so make sure you keep an eye out for them and dodge accordingly. In the second sector, you’ll start encountering mines. Like asteroids they cannot be destroyed, but they’re slow and easy to see coming, as they’re completely stationary. However, you’ll usually see them in clusters, all lined up in a row. Make sure you maneuver carefully!

5. Shoot down the cargo ships!

Sometimes yellow/orange glowing armored ships will fly into your view. These are cargo ships and they contain a lot of gems, so shoot them down! They’re armored so they can take a beating before they finally go down, but it’s worth it!

After you finish a level, sometimes you’ll find an equipment crate. They cost gems to unlock, and the better the equipment, the more it’ll cost. This is your main method of acquiring new equipment. The other way is to buy off the black market, once you unlock it after you clear the first sector. The black market has way better crates, but they cost credits to open, the premium currency of the game. It’s worth it though, as the equipment is usually super rare grade! You can earn credits by progressing through the game and completing the secret missions, too, so you don’t have to cough up real money.

That’s about it for general space tips. If you have any other questions or suggestions, leave a comment below. Until next time! 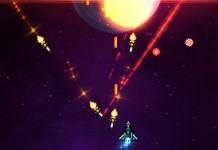