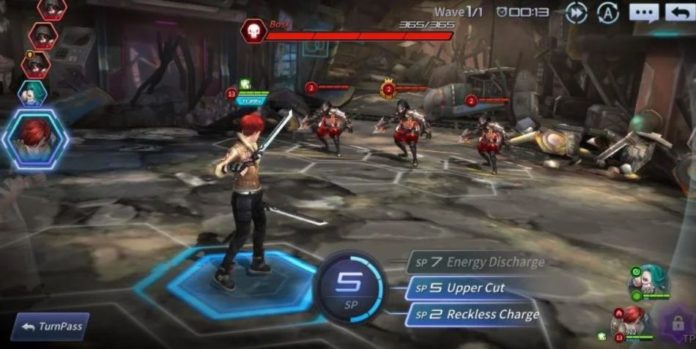 In today’s article we are going to share with you all of the Gate Six: Cyber Persona tips and cheats to help you defeat all the enemies that might come your way and show then how you properly deal with the annoying ones!

This game seems to me like a futuristic, more neon variant of Final Fantasy combined with something else that I cannot really think of right now. Either way, it’s very fast paced, it has very pretty graphics, and overall a good fighting system.

Start working on the Main Quest

The main quest of the game should be your first step. You can start completing the missions to get stronger slowly, and also gain a lot of EXP while unlocking the game’s features.

This is what I have found to be the most useful way to level up and maintain a constant source of loot. Whenever you go complete some quests you will receive various currency items which you can use to summon new units into the game.

The Tutorial Quest has a total of 23 tasks which will reward you with a ton of stuff, while also showing you how to maneuver around the game. It is super easy to start completing these quests, as you can see the task in the main interface on the left side.

There, once you have completed the main quest stage 5-4 you will be able to register new quests and keep on progressing. In my opinion, if you try to do the Tutorial Quests first and try to progress to 5-4 it is the safest way to have quests constantly and level up relatively fast (depends on your units power now).

Use your Diamonds to summon new units

In my opinion this is the best way to spend your hard earned Diamonds if you are a f2p player. If you are a premium player, of course, you are free to spend your money on what ever you want, but even for that I would have a few recommendations.

But now back to the summoning – When you are in the main interface, after clearing stage 1-3 (do as the quests ask) you will unlock the “Summon” function which will let you acquire new units for your team.

All you have to do in order to get new units is tap on the “Summon” tab and then go to the option called “Summon Unit” which will show you two possible options: “Summon 1 Unit” and “Summon 10 Units”.

The first option costs 90 Diamonds, while the second one is 900 Diamonds, but it will give you guaranteed a 3* or higher unit, which is what you are aiming for basically. I suggest that you try your best to save 900 Diamonds and do the “Summon 10 Units” because it will be a big asset for your team.

Summon every day once for free!

Every single day you will be able to do 1 summon for free: the “Summon 1 Unit” will reset every 24 hours (from your last purchase), and it is free. It has a chance to give you 3* units or higher, so I definitely suggest that even if you don’t want to play the game that particular day you at least log to claim this.

By doing so you can even get a super powerful unit while you are not actively playing, and so the next time you will log in to play you can have it ready. Another thing which I suggest that you do if you are doing this (logging in just for the free summon) is also claim the free daily rewards!

If your Daily Rewards do not appear as soon as you log in, you can find them in the top right corner of the main screen, in the menu with 3 lines. Tap on that, and you will see the option “All Rewards” there. Make sure you check this and claim all the rewards you can every day.

Upgrade your units whenever you can

You can also upgrade the units that you got, by heading to the “Unit” tab in the main interface and selecting the best units that you mostly play with. Once you selected the unit you want to upgrade, on the right side you will see the “Level Up” button. Tap on that and select the heroes and units you want to use as EXP (or feed) for your main units.

If you are not sure which ones to pick, you can either select “Auto Select” or manually select them. I suggest putting there the 2* and 1* units which will never get to see the light of day on the battlefield!

In order to upgrade your heroes you can also upgrade their Affinity (Light, Dark, Water, Fire or Wind). This will require special stones for that Affinity, which you can collect by Dismantling that element’s units, from Contracts or by going to Watcher’s Hall of that element.

You can also Rank Up your heroes (add stars to them). They require 3 of the same star unit to be upgraded to the next star. So for example if you have one 2* Red Hair Rex and you want to make him 3*, you will need a total of three 2* Red Hair Rex units. Keep this in mind, so you will not dismantle or use as feed the heroes you want to upgrade!

Battle the enemies the right way!

Now let me tell you a little about the Gate Six: Cyber Persona battles and give you a few battle tips and tricks, so you will not get lost whenever you are encountering new enemies or instances.

– Edit your formation before battle start! This is super important, as it can lead to either a win or a loss on your side! You can do this by tapping on the “Edit Formation” button before the battle.

– Place your tanky units in front! The front line is always the one that enemies will attack first. Make sure you place there the most defensive units you have, and not the damage dealers. The damage dealers should be at the back, because they do not have such high defensive stats, and they can die one shot.

– Whenever you formed a good unit composition, you can link their skills by tapping on the “Link Skill” button. Because every unit has a unique link skill, and by doing this they can follow up each other (like in a game of “tag”) to attack the enemies in a succession of attacks.

– You can have a maximum of 5 units deployed, plus a Striker.

– Every stage has a unique layout, and it is up to you where you want to head on next. You can choose your own path from the available routes, so depending on what path you pick, you will earn different rewards.

– You should always try to go for at least 3 feats which exist in each stage, so that you can increase your rewards gained. There are a few stuff you should remember about the stages tho, so let me cover these below!

– In my opinion you should try as much as possible to go for the various areas that you see while still keeping a healthy HP. This will increase the rewards you get!

Learn what the battle object are and what they give!

Here below I will tell you all about the objects you can get from the various tiles during battle mode. If you are still confused about this, you can keep this page open when you are fighting so you can quickly read a little about each of them!

– Supply Object: This is a random item which comes to your aid by either heal an ally, revive a dead ally or instantly kill monsters.

– NPC Object: This will spawn a random NPC which can be either friendly or will try to attack you. (it’s random)

– Physical Object: This will give you randomly a condition or an item.

– Trap Object: This is a trap and you can try to disarm it by spending some resources, but if you fail, you will take some damage.

– Bomb Object: This bomb will explode after some time, and if you haven’t finished your stage in the meantime, it could deal quite some damage to you.

I suggest that you don’t try going for the Traps if you are not sure your team can handle some damage, because it is not worth the risk. On the opposite, always try going for Supply Object! This is super useful no matter the result!

These would be all of our Gate Six: Cyber Persona tips and tricks that we have for you right now! Do you know some more useful game tips that you want to share with us? Leave them down in the comments section below!