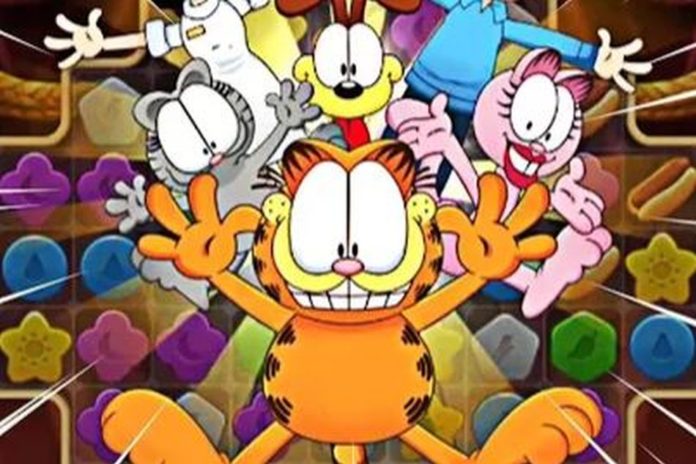 In today’s article we are going to cover all of the Garfield Puzzle M tips and cheats that we have gathered so far and share them with you, so that you can pass more levels in this Garfield themed match three puzzle game!

Unlike many other match three games out there, which bring you some other challenges such as decorating and rebuilding, this one is simply a match three game! There is nothing else to do, and this is as straight forward as it can get! But that is exactly why it is such an addictive and good game – because it places all focus on the game itself (not decorating and whatnot), and all you need to do is play at your own pace!

But you know, there are some tips and strategies that will help you pass more levels easier, so if you want to learn them, then let’s not waste another second and dive right into the Garfield Puzzle M tips and tricks right here below!

Start with the story mode

In the game you can start by playing the story mode – this is basically you playing the normal levels as much as you can, and completing the various missions that you find there (not exactly typical missions, but more like missions which get a progress bar – but we’ll discuss these more in detail below).

Basically all that you should focus on in the game is playing the story mode – a.k.a. the levels. These are pretty straight forward, so don’t worry about missing something out, because you probably will not. So early on in game there is nothing much that you should worry about – just play and you will slowly unlock everything that the game has to offer!

As you will progress through the game, you will start unlocking boosters and that will make progress a little easier because they will help in case you get stuck.

Are there missions in this game?

Well, there are something that you could call missions, but it’s not exactly a task that you will receive and have to complete within a certain time or so. It’s more like a type of mission which you never applied for, and which you might argue that you never know was actually in the game!

Basically when you are in the game’s home interface, if you tap on one of the outlines that you see there, you will notice that all of the objects with an outline have some sort of progress bar which shows you various %.

That is completed as you pass more levels, and for the very first one, the Poster Mission you will have to pass level 90 entirely to complete all of them. It’s super easy and all it needs you to do is play the game – that’s it!

Try to pass the level with as few moves as possible

This is something that will help you get more points (or money) at the end, so I definitely suggest that you try to complete the levels with as few moves as possible.

You will see while you are playing in the top left side of the screen the number of moves you have left in game. Try to always pass the level within those moves, and especially with as few moves as possible because the rest of the moves will add tons of goods and points!

Basically 1 move that you haven’t used will give you one random special combo! That will mean that if you have 20 moves left, you will have 20 special combos left on the screen which will add up to your points at the end!

Try to always think of a strategy to complete the level with just a few moves, because that way the left over moves will add up to extra points and combos and those are worth a lot more!

My tip here: Always look for the best combos that you can make depending on what the level requires you to do. If you need to collect a certain number of blocks of the same color or so, try to think of the best combo to get those blocks quickly (which could be the rainbow spiral)!

Learn all the combos in the game

Are you curious to know what are all the combos in Garfield Puzzle M? Well, let me explain them to you so that you can know how to make them and know exactly what they do!

Line Sweeper: This can be made by matching 4 tiles of the same color in a line. Depending on which direction the lines are pointing, that is the way the line sweeper will remove all the tiles! (in a line)

Exploding Bag: This can be creating by matching 6 tiles of the same color in a L-shape. By doing this you will create something like a bag of chips which will explode in an area of 3×3 tiles!

X Sweeper: This can be created by matching 7+ tiles of the same color in something like a + or X shape. This special combo will destroy all the blocks in a X shape on the board!

These are all the combos currently available in the game! They are really not hard to do and if you can do them, then I would suggest that you do these over normal simple 3 matches because they will help you complete the levels much faster!

Make super combos – they help you pass the levels faster

The super combos are your friends – they are basically created when you match 2 special combos together, such as the Rainbow Spiral and the Exploding Bag! Once you have matched them like this, they will create a super combo which will help you by a lot!

I suggest that you always try to match 2 special combos because that way you will complete the level much faster and you will get extra points – lots of them. My favorite super combos to make are all the ones that involve the Rainbow Spiral, but also the Line Sweeper + Exploding Bag!

Try them out and whenever you have the chance, try to combo a special combo with another because you will definitely see a big difference!

Use the boosters to help you out

You will notice in the bottom side of the screen 3 combos which will help you pass the stages. Those will be unlocked as you progress in game and if you happen to be stuck at a level or simply want to pass it much easier, then I suggest that you try and use them then!

The first one is the Hammer which will remove one tile of your choosing!

The second one is the Rocket which will remove two lines in a + shape, from the point where you tap on the screen.

The third one is like the Rainbow Spiral, and it will remove all tiles of 1 color from the board!

Use these when you are in a tough situation and you are having a hard time passing the level, because that’s what they were made for!

See a flying gift? Tap on it!

If you happen to spot a flying gift somewhere on your screen during the game, make sure that you tap on it and watch an ad to open it because it will give you a random reward which can be super good!

For example I got 700 Money from it once and another time 1200, so it is definitely something that you should try to get every time you get the chance!

At the end of the level, you will notice a small button which will give you 5x the amount of money you have received from that stage if you choose to watch an advertisement!

In my opinion you should definitely do this for the stages where you have made a lot of cash, but not for all of them because you will end up spending more time watching ads than actually playing – so try to do this only if you really want or if you made a ton of cash during a stage!

One other way to get free money is by being in the main interface of the game (in the Home screen). You can go there by tapping on the Settings button -> Home button or you will go there the first time you open the game.

To get free money, all you have to do is check on the very top of the screen where you see the amount of money you have. Simply tap on the option next to it to watch a short advertisement and receive a random amount of money for free!

Free moves? Why not!

If you are playing a difficult stage which you’ve struggled with again and again, you can choose to watch an ad to get 3 free extra moves added to the count. Do this only for the levels which you have problems with, because they will definitely come in handy and you won’t have to spend your boosters!