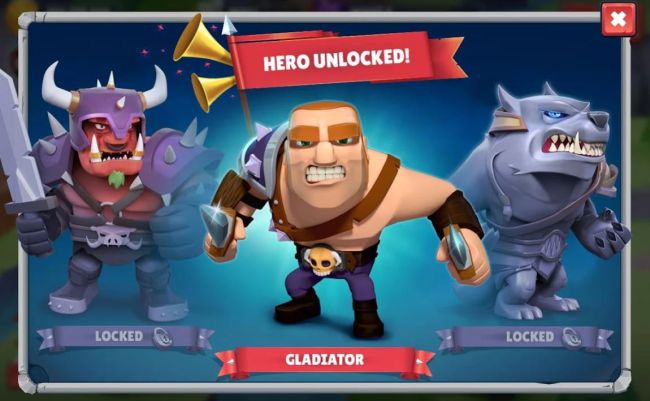 In today’s article we are going to cover all of the Game of Warriors tips and cheats to help you pass more stages and build a super powerful Castle with strong units to protect it.

Since this game will have plenty of things to conquer and battles to be won, I am going to tell you everything that you need to know in order to pass more stages and defeat more waves of enemies in all of the upcoming battles!

And because you will probably want to invade quite a lot of colonies, I am going to tell you everything that you need to know in order to do that, so without further ado, let’s not waste another second and dive right into the Game of Warriors tips and tricks right here below!

If you want to make upgrades fairly quick, then you should consider starting to challenge the waves because those will give you Gold upon completing them and they will also give you some EXP, which will help level you up and unlock more skill points.

The best thing that you should do is to try and progress in the waves battle as much as you can, and when you cannot advance any further then that’s when you should start making upgrades.

Once you’ve made plenty of upgrades, you should go ahead and battle the next waves and that will help to give you some extra Gold and EXP. Just remember that the main way that you can gather Gold is by challenging the next waves because winning in those battles will give you plenty of Gold.

Upgrading your units will be pretty easy, but it will require a lot of investments to be made. Basically you will start with the Farmers, who have no advantages and disadvantages. They are a balanced unit, but it’s not really super strong, so if you want to make upgrades, there is a whole skill tree for that!

There are two main ways that you can specialize in once you have upgraded your Farmers three times: towards the Militia (on top) or towards the 3 other factions which specialize in certain weapons (on the bottom side) – with the first being Militia Farmer (which is an upgraded Farmer basically but with strengths and weaknesses).

The Militia (on top):

– This unit will have no weaknesses and also no strengths against certain troops.

– They will become Swordsmen, who wield a sword and shield.

– They are the only troop who is somewhat “balanced”, or has no advantages / disadvantages against other troops.

The Specialized Units (on bottom):

– These units will have a strength and a weakness, depending on which way you will advance in the Soldiers Tech Tree.

– Having an advantage over another troop will mean 50% bonus damage against that troop.

– Having a disadvantage versus another troop, will mean that your units will take 50% bonus damage from them.

– If you don’t pay close attention to which units the enemy waves have, you can basically set the path to defeat yourself by deploying the wrong troop, so going the specialized units way can be a double-edged sword.

– You will need to upgrade all of the troops so that you will have them all equally strong to counter the enemy incoming attacks.

Know your troops’ strengths and weaknesses

As I mentioned above, the troops will have strengths and weaknesses. And if you really can’t make out what they are, let me explain a little bit so that you can better understand:

– Spears are strong against Mounted and weak against Javelin. (Spear has an icon with a shield and 2 spears)

– Mounted are strong against Javelin and weak against Spears. (Mounted has an icon with a horse’s head)

– Javelin are strong against Spears and weak against Mounted. (Javelin has an icon with a long spear/javelin)

Remember that in the upper side of the screen when you are defeating the waves, you will be able to see the enemy troops that are about to be deployed. Those will be represented by the icons, which is why I wrote in brackets how the icons look – so that you can try to counter them and deploy units which can have an advantage over the enemy.

Get that extra Free Gold!

After each wave that you defeat you will have a chance to receive an offer that will reward you with extra Gold for simply watching an advertisement. This is a super good offer, because it will give you a lot of Gold in a fairly short time.

If you think about it, you will receive as much Gold as you would for defeating a wave in maximum 30 seconds (that’s how long it will take at most to watch an advertisement). So if you are really dedicated to advancing quickly and upgrading your troops as fast as possible, then I really suggest that you watch that ad offer when it pops up because it’s helpful.

Conquer more colonies and upgrade them

The Colonies can be found if you press on the Map icon in the bottom right side of the screen. There you will have several purple colonies which you can see when you head on there. Each of the enemy colonies will have a certain level, starting with 1.

You should start challenging them, starting with the lowest colony level. Once you have successfully conquered it, you can tap on it (it will turn to have a Red flag) and you will notice that you can upgrade those conquered colonies.

Whenever you upgrade a colony you will receive some passive Gold over time, so it’s super useful to conquer as many colonies as you can and upgrade them to level 5 to receive a ton of passive Gold.

If you do this you will not even have to fight a whole lot, and you can just wait until your Gold adds up so that you can make all the upgrades you need.

My tips here: I would suggest that you always try to conquer as many colonies as you can and upgrade them, starting with the very first one, because if you ever get stuck and cannot advance any further in the waves battles you will still have a constant source of Gold.

Another thing which you should do is try to always use the skills (the horn especially) when you are battling in those stages, because all that you really have to do is break through the enemy gate, and you’ve successfully conquered it! So it’s pretty simple, but if your troops die, you will fail. So try to take all precautions to not fail!

The last thing I would suggest is that you always upgrade the conquered colonies to level 5 to receive more passive Gold per minute! This is an investment which will pay itself off in a couple of hours.

Use the Gems to upgrade the Bank

The premium currency in the game is the Gems, which is a currency which can upgrade the Bank. This Bank building can be found in your camp and it will passively increase the following:

The Bank will fill out in time, and you should try to log in and collect the Coins it has collected for you because once it fills up, it will not collect any more and all of the time that you will stay offline, it won’t do anything at all. But if it is empty, it will instead collect the Coins for you.

The Ballista Ammo is right behind your camp’s walls and it will have two different weapons which you can choose from. The two weapons will each have their own specialization, and this is basically the skill which you can shoot out every now and then.

You can choose between the Big Arrow, which has 300% bonus damage against siege weapons and elephants, and the Small Arrows, which is a set of 3 arrows which deal 50% bonus against soldiers (if they land).

I would suggest that you upgrade the Small Arrows for start and use those, as your soldiers will be pretty strong to take down the siege weapons at the beginning, but after you’ve advanced a little bit through the waves you should upgrade the Big Arrow too and start using it if you see that a wave is super strong.

In the General tab you will have your General’s skills, which will be divided into three main sections:

– Active Skills: the skills which you can cast and can either buff your team, or grant bonus damage.

– Base Skills: these skills are passive skills which can boost various traits, such as increase the tower’s damage, grant you extra Gold or EXP and stuff like that.

– Army Skills: these are useful boost which can reduce cooldowns and passively increase troops damage. They are basically skills which will make battles easier. (supposedly)

I would suggest that you start off by adding a couple of points into the Army -> Units Cooldown because that is SUPER useful and it will allow you to send out troops much faster. After you have upgraded that, you should upgrade the Army -> Melee Soldiers Damage by a couple of points, because that will help early on when you only have melee troops.

Once you’ve upgraded these, pay attention to what other traits you would need and what upgrades you could use, and add points into these. However, do not neglect the Cooldown because it is a super good skill.

These would be all of our Game of Warriors tips and tricks that we have for you right now! Do you know some more useful game tips and strategies to defeat more waves? Feel free to share them with us and the rest of the players down in the comments section below!