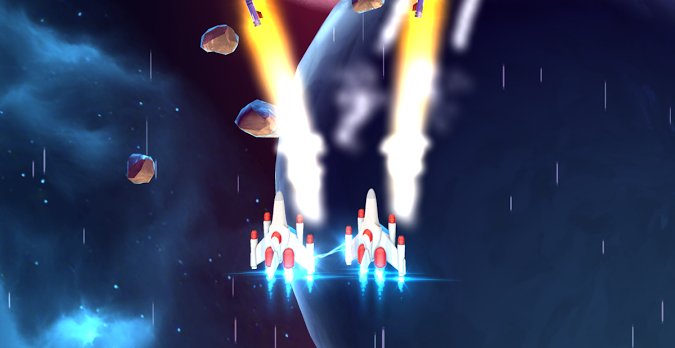 The iconic space shooter Galaga Wars returns for its anniversary in style as Bandai Namco release the smartphone version of Galaga Wars. A high quality bullet hell game for fans of the genre, one that starts at a relative slow pace but picks up quickly. You have multiple ships, different power-ups and waves after waves of enemies to destroy. And we’re here to help you get the most out of this by sharing with you some Galaga Wars cheats and tips to get a better high score and get as far as possible in the game.

So let’s not waste any time and let’s check out the Galaga Wars tips and tricks below, because there are tons of enemies waiting to be destroyed.

1. Always Upgrade Your Ship
No matter which ship you own, you will have to upgrade its boost over and over again in order to make it better against the enemy forces. Start with the boosts that you enjoy the most, then work to upgrade the others and never spend the coins to rush the times – that’s just a waste of coins!

For the original ship, the Fighter ship that you have unlocked by default, I would suggest upgrading the Missile Barrage first, then the Jumbo Shot, Fire Rate, Turret and Magnet in this order. I would always start with the one I feel is the most useful boost, the one that helps me get further into the game.

2. Warp rarely
If you are trying to play for getting a higher score than ever, do not warp! The more sectors you go through, the more points you will get, so Warping will only reduce your potential top score. However, if your goal is to reach a brand new sector or you’re simply bored of going through the same stages over and over again, you can warp. But make sure you make it count, because the items required for warping are not easy to get!

3. What ship to purchase?
At the moment of writing this, there are three extra ships that you can purchase for 99 cents each. Although I personally consider the starting ship – the Fighter – a pretty solid ship, if you want to purchase a new one, I would suggest going for the Sol Valou ship. It has some really solid boosts, like the Twin Zapper that gives you two shots at the same time, the amazing Circle Barrage that destroys everything around you and the Ramshield that’s extremely fun to play as it allows you to smash headfirst into enemies.

4. Watch ads to continue
When you’re on a really solid run, you should always get the option to watch an ad and continue playing. I would suggest not to spend coins unless there are no ads available, because the coins are extremely important for the upgrades, which will get really expensive really fast.

5. Learn the patterns of the enemies
The good thing about Galaga Wars is that the enemies will always follow the same patterns every time you play. So if you play multiple times through a sector, you can easily learn where the enemies will come from and what routes they’ll take. It’s a lot easier to destroy them when you know what to expect. And even if you don’t, there are hints on the screen: the part of the screen from which the enemy ships will come from will flash red, announcing that is where the ships will appear from.

6. How to deal with boss fights
Boss fights seem difficult, but they are actually easy if you manage to stay calm. Always keep an eye on the tons of bullets that come your way and navigate your way through them. Usually, the best idea is to stay as far away from the boss as possible because that’s where you’ll have the largest distance between the bullets and you’ll be able to easily squeeze through. Just like regular enemies, bosses follow the same patterns when shooting at you and it will be very easy to quickly learn how to avoid their shots and stay alive for long enough to take them down.

These would be our Galaga Wars tips and tricks for you. If you have anything extra to share with us, let us know by commenting below.