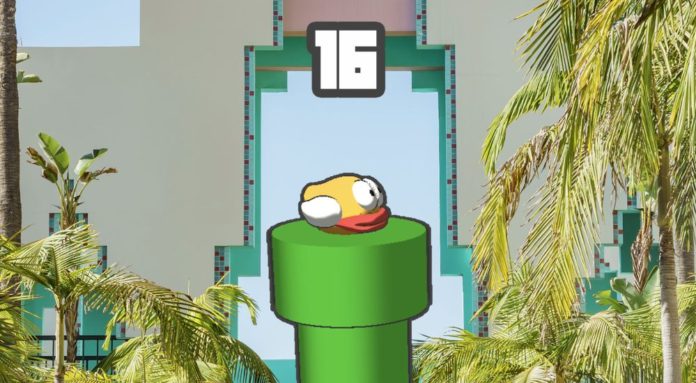 Even though it’s been 4 years since the release of the original Flappy Bird game, we still see a fair share of “Flappy” games being released constantly. And of them all, Future Flappy by ApPnOxIoUs is definitely the best one and the closest to the original.

And we’re here to help with a bunch of Future Flappy cheats and tips – these will help you get better scores in the game, but also stay sane and keep your device safe. Because, just like with the original, you can’t put it down and it can drive you crazy.

Future Flappy is a true evolution of the original, now taking advantage of the Augmented Reality features that our devices offer and allowing us to play the game using our surroundings as background. But despite this cheesy feature, it’s still insanely difficult so our Future Flappy tips and tricks will surely come in handy.

Choose AR over the AR Kit
When you start a game, you have the option to choose either the regular AR mode or the AR Kit. I suggest you go with the former since that makes the pipes smaller and everything easier to play.

If you have already made your selection, you can only select again if you force quit your app, then restart it. Choose the regular AR option and recalibrate. Try playing a few games on each mode to see which fits best, but I still believe it will be the regular augmented reality that will prevail.

Revive watching ads
Unlike the original, Future Flappy gives you a chance to keep on going if you’re on a run – and you do so by watching an ad. Take this chance, especially because you will start over from the original pipe and it will be a bit easier to make it far.

Choose a neutral background
Playing in AR means that you get to choose your own background. My recommendation is to go for something plain and simple, such as a wall or your desk. The fewer distractions you have on screen – and the better contrasting colors, the better you will do in the game and the more you will be able to focus on what matters: getting through those pipes!

Time your taps
This is probably the most important skill that you must develop in Future Flappy in order to get a super high score. Timing your taps is vital and it takes some practice. The golden rule of thumb here is to tap regularly and slower rather than faster.

Find your rhythm, don’t be afraid to let your bird fall and get it back up while tapping calmly. You have to think fast and move fast, that’s true, but if you lose your calm, you lose the game!

Fly low
A good strategy that I found to work well in my case is to usually go for the openings between the pipes from the bottom instead of the top (during a fall).

If you fly low, you have better chances of just making it through without hitting the top pipe. If you are trying to go through during a fall, in most cases you will tap too soon and you will hit the top pipe – or wait too long and hit the bottom one. So the best way to approach this is by flying low and tapping to go up before entering through the pipes.

Practice a lot
The original games was launched in 2014 and even though you maybe managed to get a decent score back then, you’ve probably lost your practice. So be patient, try over and over again, get used with the new way of playing Future Flappy and eventually you’ll get there. Practice makes perfect!

Unlock new birds and pipes
Unlike the game it uses for inspiration, this one gives you the chance to change things around: you can unlock new pipes based on your score and you can also get new birds by spending coins.

It seems that the only way to get coins in the game is by watching ads right now, but it doesn’t really matter as none of these things change the way you play the game. But if you want to do it for bragging rights or simply for a bit of variety, don’t forget about the unlockables!

Take breaks
You can’t really play Future Flappy for an hour straight without risking to get extremely angry. This game can get very frustrating very fast – and the angrier you get, the worse your performance will be.

So for the safety of your device and your own sanity, make sure to take breaks often. Try to play for no longer than 10-15 minutes straight, then take at least 5-10 minutes of away time. This will help you calm down and you’ll see that you’ll do a lot better when you get back into the game and give it a new try.

This would be all that we have for you in terms of Future Flappy tips and tricks. Do you have other bits of advice to share with fellow players? Then let us know by commenting below. If not, you can at least brag with your high score!