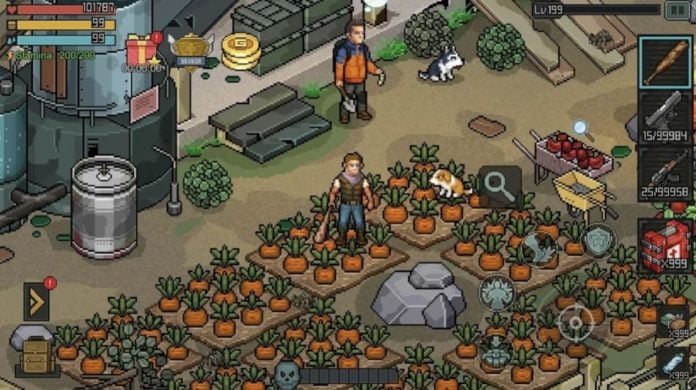 In today’s article we are going to share with you our Fury Survivor: Pixel Z tips and cheats to help you take down all the hordes of zombies coming your way, with the least amount of effort and supplies used to keep you alive.

If you are a fan of casual survival games (which don’t require endless farming and over 200 IQ to figure stuff out) as well as good pixel graphics, then this game will definitely keep you entertained, because I know for sure that it kept me busy for hours!

So if you are eager to learn all the best Fury Survivor: Pixel Z tips and tricks, then let’s not waste another second and dive right into it!

When you first start in the game, you’ll be introduced to it pretty softly – a story where a man finds himself all alone in a destroyed world, full of zombies (very typical for a zombie themed game). Soon after, you’ll be ambushed by zombies, and what is the solution? Destroying everything!

That’s exactly right! You will have the “Old Stick” as your first weapon, and that will be pretty handy in taking down everything, from zombies to structures! There are a few things you can destroy:

This will loot the place and you will get even more stuff! I think that it’s super important that you loot everything, because you will need every little resource you find in order to survive, especially since your hunger and thirst constantly go down.

Know when to use the right weapons

What I mean by this is that you can use either a ranged weapon or a melee weapon. The melee weapon is the Old Stick, and later on you can find a Security Laser Cutter.

Never waste your bullets for taking down the structures mentioned above. Instead, just use the melee weapon which doesn’t require ammo because you can use it endlessly.

Use the ranged weapons (with ammo): against tough hordes of zombies and against bosses.

Generally speaking, you should always have the melee weapon equipped just in case! This is because when you go around the map and are looking to loot stuff, you don’t want to accidentally use bullets for boxes (because it’s a waste).

Whenever you are dealing with bosses, you should always kite them. That means that you should attack them from a distance and keep on moving! All the time! The boss’ attacks will not land on you as easily and often as it would if you were to attack them from melee range.

The only time you should use melee weapons against bosses is when their shields are up! In this scenario, the bullets will all miss, so you need to get close and start attacking until the shield goes down.

Another thing to keep in mind during the boss fights, is that you should always have health packs to help you heal! Not only that, but if your thirst and hunger and low, make sure you eat and drink before fighting!

When you see zombies, don’t shy away and run from them! Instead, fight them because you will want to level up quickly! You should rush to level 8, because that’s when you can start claiming achievements.

I’m pretty sure than by now, you have completed quite a few achievements if you followed what we said before. There are quite a few good rewards you can claim then, so definitely take every opportunity to destroy everything, collect lots of loot and level up ASAP!

When you travel by car, you can get down and blow up stuff!

When you will be travelling by car, you can stop by tapping again on the car button and you will get off the car. You should do this when you see big trucks on the side of the road.

You can craft explosives and use them to blow up the big car and receive tons of resources. This is another quick thing you can do if you are looking to loot every little corner, just like myself.

You can start crafting various things, from distilled water to explosives and so on. You will need plenty resources for this, so make sure you always pick up Sulphur and Gasoline, because that’s what you will use the most (to make explosives).

If you don’t want to be standing around crafting, you can just craft them in advance and keep them in your bag!

Make sure you check the Supply Restock!

This is the option on the top left side of the screen, which looks like a gift. You can claim them at random, after a certain amount of time. You can get pets here, as well as gears and weapons and whatnot.

Always pay attention to the timers and make sure you check back whenever it says that the next reward will be ready! You can even get an adorable husky or a kitten!

Use your skills! Don’t forget about them!

Next to your attack button, you will also have a couple skills which will help you survive! Use them when you fight bosses or huge hordes of enemies, because they are definitely useful! These are the skills:

– Enrage: fills your rage bar, deals 150 DMG and boosts your Attack for 4 seconds

When you see glowing stuff on the ground, go pick them up!

Whenever there are lootable items on the ground, you can go right ahead and pick them up! They will be shown as having a few pixels red and green glowing over them, so always pay attention to this!

They will be visible even behind monsters and structures, so if you see glowing pixels, go and pick up stuff because there is free loot waiting for you!

In the game you will have an arrow on the top side of the screen which points you in the direction where you should be headed. However, you don’t always have to go there, and instead you can go and explore the environments to loot stuff.

This will come in handy quite a bit, because you will run out of food and water (and other supplies) at some point, so you need some way of restocking!

Each time you level up after some point (after level 4 if I am not mistaken), you will receive Perk points. You can open the menu on top of the Bag icon and start allocating them to whatever you feel like you need most.

However, if you are having a tough time surviving, you might want to go for Tenacious (5/5) -> Dexterous (5/5) -> Second Wind (5/5) because that will restore HP when you kill an enemy.

You can also get Perks points from completing achievements, not only by leveling up!

Last but not least, this is one of the most important features! Don’t leave your game open and go AFK because you will start losing Hunger and Thirst like crazy, so when the values reach 0 you will lose HP instead!

That’s super dangerous, so I advise you to pause the game if you are going AFK, or to exit altogether. It’s not really worth wasting your food and water resources to replenish hunger and thirst for being AFK!

These would be all of our Fury Survivor: Pixel Z tips and tricks that we have for you right now! Do you know some other cool game tips that you would like to share with us? Leave them down in the comments section below! 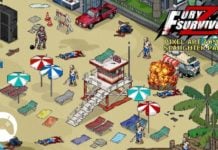