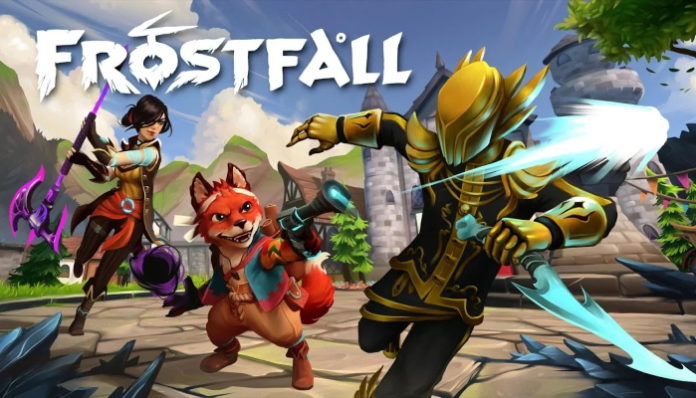 Frostfall is an all-new fantasy battle royale game where you sling spells, throw poison potions, and wield ancient technology as you fight to come out on top! With lightning fast matches and a variety of colorful characters to play as, Frostfall is the perfect battle royale to play on the go.

Be ready for a fight as soon as you drop in!

The world of Frostfall is not very big; do not let the map placement screen fool you! Before every match, you can place your piece on the map to show where you will drop. You can move it freely until the match actually begins.

You can see other players’ pieces as well, and there is a good chance you will start the match in the vicinity of another player. It is best to scramble for a weapon as soon as possible, because you may have to fight right out of the gates!

Play around in the training room for a while!

When you start the game up for the first time, you will be placed into the training area where you can play with all of weapons and abilities freely. We recommend trying out all of them so that you get a feel for the gunplay and attacking in this game.

We will also go over all of them in our guide, but if you want a more hands-on approach we recommend messing in the the training area for a little bit. You can always come back later too if you want to hone your skills.

Your health bar is split into two parts: your health (white) and your armor (blue). When you take damage, your armor will deplete first. Your armor depletes faster than your health does.

When you lose all of your armor, your health will begin to take damage. If you are taking too much damage, try to evade your enemies and stay out of combat. If you remain out of combat for a few seconds, you will begin to regenerate health.

You can only regenerate so much health, and after you hit your cap the rest of your bar will fill up with armor. It is important to try to hang onto as much health as you can, as it is the portion that cannot be recovered.

Whenever you take down an opponent, they will leave a green orb above their body. Grab this and you will heal a little bit of health!

There are a total of nine weapons in Frostfall, and they can be categorized into three groups: melee, ranged, and magic.

The first melee weapon we will go over is the Frostbite. The Frostbite is an icy dagger that swings fast and has very short range. It deals 20 damage to targets. The Frostbite is the perfect item to pair with abilities that help you stay near your opponent, such as Dash, Sprint, and Hook. If you can stick to your opponent, you can run circles around them while stabbing them repeatedly!

The second melee weapon is the Voidreaper. The purple axe uses the power of void magic to decimate your foes. It takes a while to swing this axe since it is so heavy, but because of its size it also has much greater range than the Frostbite. It deals 50 damage, but if you hit an opponent with the edge of your range (as indicated by the filled in section), it will deal 100 damage.

Doc’s Demise is the most basic ranged weapon in all of Frostfall. It is a short ranged rifle with a good rate of fire, automatic fire, and deals 12 damage per shot. This gun is perfect for just about any scenario thanks to its all-around stats, and is a good backup weapon. Remember that all guns can be manually reloaded by tapping its icon in your inventory!

The Vesper is a handy pistol that is good for short range engagements. It has a little more range than Doc’s Demise, and it deals 40 damage per shot. It is not automatic, so you much manually flick between shots to keep firing. It reloads very quickly, so it is a good sidearm to keep with you.

The Borealis is a long-range sniper perfect for picking off unsuspecting opponents. As to be expected, it has the longest range out of all the ranged weapons. Aiming with the Borealis will cause your camera to zoom out a little further in the direction you are aiming to give you a better shot.

The Borealis deals a whopping 95 damage per shot, but make sure you hit! This thing only has one round in the chamber before it must reload, and it takes 3 seconds to reload which is a lot of time for opponents to get the jump on you.

The Cindershot is a short-range shotgun that deals 20 damage per pellet, and each shot launches 5 pellets out. A close-range shot will deal 100 damage to a target, making this the perfect weapon if you like to get close!

The Shrike is a enchanted boomerang that does 25 damage going out, and 25 damage coming back to you if it hits again. You do not have to worry about ammo, just the travel time. It has the same range as the Vesper, making it good for poking at medium range opponents.

Magic weapons require a little more finesse to get the most out of them, and the Fizzy Doom is no exception. This bubbling concoction creates a poisonous puddle wherever it is thrown, dealing 15 damage every tick to enemies standing in it. The puddle lasts for a total of 5 ticks.

The Staff of Ahgon is a magical fire staff that can release explosive fireballs. When you aim the staff, it will begin to charge, and it can charge up to five levels. The more you charge, the stronger the fireball will be. A fully charge blast will deal a whopping 145 damage to anything caught in the blast!

The fireballs travel a little slow, so any opponents ready can easily dodge out of the way, so it is best to pair the Staff of Ahgon with movement impairing abilities.

Now that we are done with the weapons, it is time to move onto the abilities. Each ability has infinite use, but you must wait for the cooldown to finish between use. Careful use of abilities is the key to securing eliminations!

Dash is the first basic movement ability. It propels you forward about 14 meters and has a 10 second cooldown. Dash is great to have in just about any loadout, as it can help you close gaps and escape opponents.

Sprint increases your movement speed by 1.7x. It lasts for 5.5 seconds and has a 14 second cooldown. Much like Dash, Sprint fits into any strategy. The increased movement speed can help you make a harder target to hit as well.

Barrier creates a light blue field around you. As long as you are standing in it, any damage you take is slightly reduced. Be careful of opponents who try to take advantage of the fact that you will most likely be constrained to one spot! The Barrier lasts for 6 seconds and has a 12 second cooldown.

Frost Armor immediately adds 50 temporary armor to your health bar. If you are about to engage an enemy, use Frost Armor to give yourself a slight edge – it may just save your life! The temporary armor last for 4 seconds and has a 20 second cooldown.

Invisibility temporarily renders you invisible for 6 seconds, and it has a 25 second cooldown. This ability can help you set up kills as your opponent will not know what you are up to you, or you can use it to escape unfavorable encounters. It has a long cool down so make sure you use it wisely!

Ice Block instantly places you in an impenetrable cage of ice, rendering you invincible and healing you while you are inside. It lasts for 5 seconds, has a 25 second cooldown, and heals you for 7 health a second.

Ice Block is good for emergencies, but remember that it has the same problem as Barrier in that opponents can set you up for further damage as you come out of it. Pair it with movement abilities like Dash so that you can get out of the way quickly!

Hook throws out a magical hook 25 meters in the direction you choose. If it collides with an enemy, they will be stunned and pulled to you after a short delay. Boasting a short 6 second cooldown, skillful use of the Hook will ensure that no one escapes you!

Black Hole creates a black hole in the location you choose, and it continuously sucks in opponents to its center for 2.5 seconds. With a moderate cooldown of 16 seconds, Black Hole is an extremely helpful ability, and it can help you line up powerful attacks. Use this for just about any occasion!

Spell Lock is also a very important ability. You toss out a long-range shadowy ball (28 meters) that explodes in a small area upon enemy contact. All enemies caught in the blast are slowed and they cannot perform any actions for 2.5 seconds.

If you watch high level players, you will see almost all of them with Spell Lock in their loadout. The silencing factor is just too good to pass up, and it also only has a 10 second cooldown. 2.5 seconds silencing time may not seem like much at first, but you get really hurt an opponent in that time.

Which weapons and abilities are the best?

This is the ultimate question, and it must ultimately be answered by you! We will list a couple of our favorite loadouts here, and you can play around or create your own builds with them!

By far our favorite build is to use the Frostbite or the Voidreaper and couple it with Sprint, Black Hole, or Invisibility. When you see an opponent, activate Invisibility to get the jump on them, then drop a Black Hole. Start wailing on them, and if they try to make some distance between you, use Sprint to stay close. You can even use the Cindershot if you prefer guns!

Another build we like is the long-range build. Use either the Borealis or the Staff of Ahgon, and pick off opponents from afar. Use Spell Lock or Black Hole if they try to rush you and use Dash to keep a gap between you and your target.

You may have noticed this already, but we really like Spell Lock and Black Hole. Spell Lock‘s silencing ability is very powerful in the right hands, so we recommend you practice with it. Black Hole‘s ability to lock down opponents can set up big damage opportunities!

That’s all for Frostfall! If you have any other strategies or tips to share, let us know in the comments below!