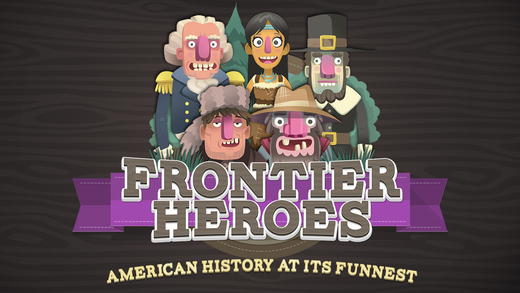 You’re all familiar with the good ol’ United State of America, but I’m sure you also know it wasn’t built in a day! Take a trip back in time with Frontier Heroes, a puzzle adventure action game that leads you through the various major developments of American history. The game will test your smarts, skills, and reflexes so we’re here to help you out with our Frontier Heroes cheats, tips and tricks strategy guide.

Each era of history has a different set of challenging mini games for you to complete, so let’s get started with your history lesson! Read on for our Frontier heroes strategy guide to becoming an American history buff!

In each level there’s a special symbol pertaining to the time period you’re in. If you spot this symbol or collect it in some manner, you’ll unlock the “Did You Know?” fact at the end of the level. These little fun facts explain small parts of history, so if you want to know the most, keep an eye out of these symbols!

2. Obtain all the achievements!

Each level has 3 or 4 achievement stars you can earn by performing certain feats, such as reaching a certain score or by doing a specific action. It’s important to earn every single star, because in order to unlock “The Land of the Free,” the final era, you need all preceding 71 stars! Some of the levels are pretty simple and easy to full star, but some are pretty challenging. Just keep at it you’ll be able to do it eventually!

3. Tips for the hardest challenges of each era!

Early America: Oddly enough, the hardest challenge of this set for us was the very first one, the bow and arrow challenge. The point achievements you should have no trouble getting, bu the “hit every target at least once” achievement is a bit of a pain due to that pesky pumpkin in the very back. To hit the pumpkin, you want to aim slightly higher than the ground target but not as high as the flag target. Somewhere in the middle is what you want to aim for. It’ll take a couple shots, but you should be able to hit it if you keep adjusting.

The Colonies: None of these challenges were particularly hard, but the one that took a couple tries was the corn farm level. To ace this one, you need to fend off the gophers and crows while collecting a certain amount of corn. Each corn you harvest grants you a tiny bit of time, so it’s going to end up becoming a tapping mania as you fight off the animals while getting the corn. Eventually green meters will appear next to the corn stalks. This is their health, which can be replenished by watering them. Be careful though, if you let a meter drop to nothing, that stalk is permanently dead and won’t grow anymore corn.

American Revolution: We almost said the simon says blacksmith level was the most difficult, but it’s not as hard as the tea boat level. To get all the stars, you need to throw 20 tea crates overboard. You don’t have enough time to get this by just throwing the crates that slide by; you need to capsize the red coats that paddle by occasionally. If you manage to hit a redcoat with a crate, you’ll get points according to the number of crates on his boat. The problem is… is that it’s a bit difficult to aim the crates. The red coats can be close, mid-range, or far away and you need to toss the crate with the appropriate amount of power. Try this one a couple times as this’ll require a bit of practice.

The Frontier: For the log cutting challenge, you need to cut 7 logs for one of the stars. Every time you time a slice when the meter is in the brightly colored spots, you get a meter block. Do it two times for both sides and you’ll perform a super cut, instantly cutting the current log. Every time you make a successful slice, perfectly timed or not, the general speed of the meter increases. I actually find it easier to purposefully screw up after you perform a super cut because the meter speed resets every time you do.

California Gold Rush: The rail spike challenge is probably the trickiest. Your timing needs to be spot on for this challenge. The hardest achievement on this level has to be the “drive the spike under 30 seconds” one. The faster you hit the nail from the moment you hold down the button, the more power you’ll apply. You want to try to be on-point with your power swings, as you’ll be able to get it around 20 seconds if you nail every power swing.

With all that knowledge, you should be on your way to the land of the free, armed with extensive knowledge of America’s history! If you have any other questions or suggestions, leave a comment below!