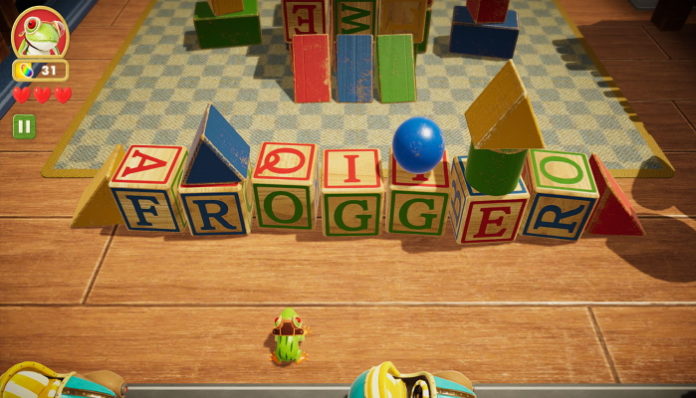 Frogger is back and he’s bigger than ever in Frogger in Toy Town, an all new 3D adventure that plays just like the classic Frogger games! Poor little froglets are lost inside the house, and Frogger needs to rescue them all!

Frogger will find himself travelling through a city made out of children’s toys, a beautiful garden full of rampant lawnmowers, a messy kitchen full of utensils everywhere, and more. It’s Frogger’s biggest adventure!

Frogger needs to rescue all of the Froglets!

With the onset of a sudden storm, Frogger needs to quickly go out into the house and rescue all of the small little froglets. They will be easily swept away by the storm, so Frogger needs to bring them all home before they are caught in the storm!

Frogger’s main objective when going through Toy Town is to grab as many froglets as he can. Each level of the house usually has six froglets to collect in total, with a checkpoint separating them by two groups. There are a few exceptions to this that you will encounter later in the game.

It is important to remember that froglets are easily spooked! If Frogger has froglets following him and he takes damage, all of the froglets will run away and be lost until you restart the level. If you are aiming to collect all of the froglets, you must not take damage!

Jellybeans are scattered around the house, and Frogger can collect them for a sweet little snack. The small ones are worth one bean, while the big rainbow jelly beans are worth ten beans.

Frogger will have a sugar rush when he collects 100 jelly beans, transforming him into Super Frogger! Supper Frogger is a lot bigger than regular Frogger, and he can knock objects around by simply jumping into them. He is also completely invincible, so feel free to charge through everything and anything!

Look out for hearts!

Frogger can take three hits before he is forced out of the level and has to try again. If you need to take a breather, keep on the lookout for hearts. They are hidden around the levels but they can come handy in a pinch!

Frogger also gets a free heart whenever he picks up a froglet, so that is good to know as well.

Collect the stars to earn coins!

Every level has three stars on it to earn. To earn all stars, you usually need to get all six froglets on a level and not take damage from a special object. Each star can be exchanged for coins, and getting all the stars will net you 50 coins.

These special coins can be tallied up in the shop to unlock some funky new costumes for Frogger, new hidden challenge levels in the house, and whole new houses for you to explore.

The special challenge levels in the house that you unlock are tougher than usual, so beware when you take them on!

Look for the highlighted objects!

Frogger has a various amount of power ups that he can take from power up boxes. JumpPlates let him ascend to hard-to-reach areas, Bombs let him blow up piles of furniture, and so forth.

Another thing Frogger can do is simply grab objects and toss them. While this seems mostly useless, tossing an object can knock down other objects. If a froglet is perched up on a high place and you do not have a JumpPlate, knocking down the object is a great alternative.

Keep an eye out for highlighted objects, as these are the only objects that Frogger can pick up and toss. There is usually at least a few scattered around the level, so if you do not have a power up, be sure to hang onto the object.

Throwable objects can also be used to stop certain obstacles dead in their tracks. For example, tossing an object at a train will derail it, causing a pile up. You can also throw them at cannons to stop them from shooting, or lawnmowers to stop them from moving around.

Much like the original Frogger, most of this game’s obstacles can be avoided by simply waiting until it is safe. When crossing traffic between the trains, wait for a clear path then move. If you are in the kitchen, wait until the stove is turned off to cross.

It is very tempting to try to speed through level as fast as possible, but we do not recommend that especially considering that these levels are not short and take some time to get through. One mistake can cause you to restart the whole level, so it is better to be safe than sorry!

The only time limit you have is the slowly advancing wall behind you, but it moves pretty slow so you usually have enough time to deal with it. As long as Frogger does not get trapped between the back wall and an object, you will be fine.

Often times you will come across a froglet that is on top of a big object that you cannot jump onto normally. The game will usually set up the environment so that certain objects naturally lead you upward.

This is another reason why it is important to take it slow and not just rush through the levels – you will miss stuff like this, as sometimes it is hidden off to the side.

For example, you may see a wrench that is hanging off of a bucket. Hop on up the wrench as there will almost always be a froglet hidden at the top. Explore to the sides to find some good stuff, just be mindful of the moving wall behind you!

Rescue yourself from the water!

In the latter half of the first house levels and into the second house, Frogger will find himself outside, meaning he will have to deal with crossing water at time. Thankfully, unlike the original arcade game, falling in water is not instant death here.

Instead, Frogger will paddle around slowly while a red gauge appears over him. This gauge will deplete rather quickly, and Frogger drowns once it does. You have about 3 seconds before the meter runs out, so quickly hop onto land or anything stable nearby!

It is best to stay out of the water altogether, but if you do end up in the water just know that you can save yourself if you are quick enough.

If you cannot rescue all of the froglets in a level at first, don’t sweat it. You can always try again later and come back once you have gotten more of a feel for the controls and physics.

The second and third houses only unlock once you have obtained enough coins, so eventually you will have to go back and get more froglets to complete more stars.

If you can get all three stars on a level on your first run through, that is great and it will make it easier to unlock the next house. However, a lot of these levels are very challenging and quite the ordeal to get through, so you can always come back later.

And with that, you should be able to get all of the froglets in the game! Remember: patience is a virtue! If you have any other tips or tricks to share, let us know in the comments below.