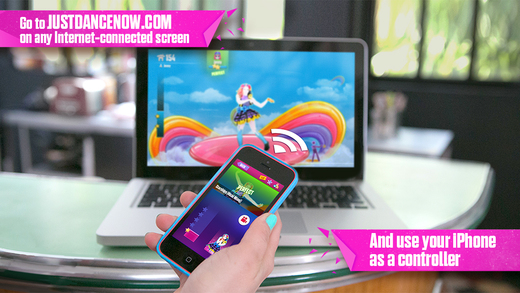 The Just Dance series is one of the more successful console series released in recent years, thanks to a simple rhtyhm game experience that can be enjoyed by multiple players at the same time.

If you don’t own any video games console but still want to try out the game, you will be happy to know that Ubisoft has released on the App Store a mobile entry of its successful series called Just Dance Now, which will allow gamers to play the game with their devices and another screen. In order to play the game, you will have to link your device remotely on JustDanceNow.com. Once linked, your device will act as the controller and no additional hardware is required to enjoy the game, unlike the console entries of the series.

Just Dance Now plays just like the main entries of the series, offering a single and multiplayer mode. The multiplayer mode of the game is especially good, as there’s no limit to how many players can play together in a single game. The basic game, which is available as a free to play title, only includes a limited song selection but it’s possible to purchase a VIP pass to access the full song selection.

Just Dance Now is now available for download on the App Store.