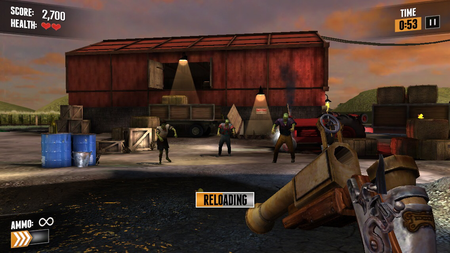 Gunfinger, a new free to play shooter game, has been released today on the App Store. If you’re looking for a quick to pick up and play game, you may want to take a good look at this nice little title.

Gunfinger, developed by Pixel Toys, is a really simple but engaging game where gamers will have to deal with hordes of zombies using a variety of weapons. The game is an on-rails shooter so if you have played other games like this, you already know what to expect from this new title.

What set Gunfinger apart from the competition is how simple but fun the whole experience is. The only thing you will have to do in the game is to tap the screen to shoot and hold it on the screen to aim. Performing special kills and trick shots will allow you to chain combos together and earn some extra scores.

Gunfinger comes with over 70 missions, several weapons to unlock and upgrade and special gadgets. Daily missions are also in so you will have plenty to do in the game. The game is a free to play title so you can expect some unwanted features like plenty of IAPs, a bit of grinding and more.

Gunfinger is now available for download on the App Store. Future updates are already being planned and they will include new missions, features and more.