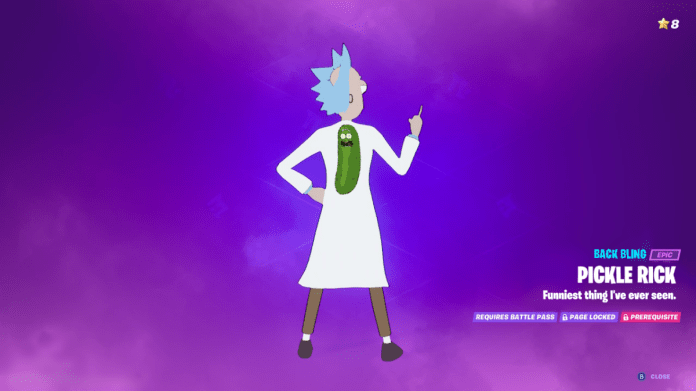 Fortnite Chapter 3 Season 4 brings us Zero Build Horde Rush where players must defeat multiple rounds of monster battles to gain victory. There are quests to complete to earn XP as you go, and eventually gain a Pickle Rick back bling. So, check out our guide below to find out all about Fortnite: Horde Rush quest guide – how to get Pickle Rick!

To gain the Pickle Rick back bling, players must complete 8 of the quests offered:

Once 8 are completed, players will have unlocked the Pickle Rick back bling. It is worth noting, also, that this is not a cosmetic exclusive to Zero Build Horde Rush quests, and it can show up in the Item Shop in the near future. This is good news for those players who do not want to play any Horde Rush games.

Defeat the hordes of different Cube Monsters, survive each round, and defeat the Caretaker at the end! The most essential part of this zero build mode is to get as much weaponry and ammo as you can at the start of each round, and use teamwork to eliminate the monsters while protecting each other.

Players have 150 seconds at the start of round one to loot as much as possible before the monsters appear, spawned by giant obelisks. These obelisks should be destroyed to prevent more monsters spawning there. This first round lasts 3 minutes, after which all monsters will despawn and any eliminated players will respawn ready to gear up for the next round.

Related: How to Defeat the Inkquisitor in Fortnite

The next round sees the storm circle shrink and move, and the variety of monsters increases to include Poison and Ice Fiends, and Exploding Brutes! When this round is over, players have time to loot once more, and find Multiplier Crystals which increase any points gained.

Each following round sees stronger monsters to defeat such as the Cube Assassin with their Sideways Minigun, and Mega Brutes who are very strong versions of regular Brutes.

In the final round, players have to defeat The Caretaker, a giant monster who can fling players backwards and cause a lot of damage. If players can work together to shoot at the Caretaker’s weak spots, he can be eliminated and the team win!

The Horde Rush Quests were released on November 1st and are up until the 15th. Jump in while you can!

That’s all for now about the Horde Rush LTM in Fortnite! Next up, check out how to earn the Chrome Punk Skin for free this season. Good luck.

Fortnite: Horde Rush Quest Guide – How To Get Pickle Rick