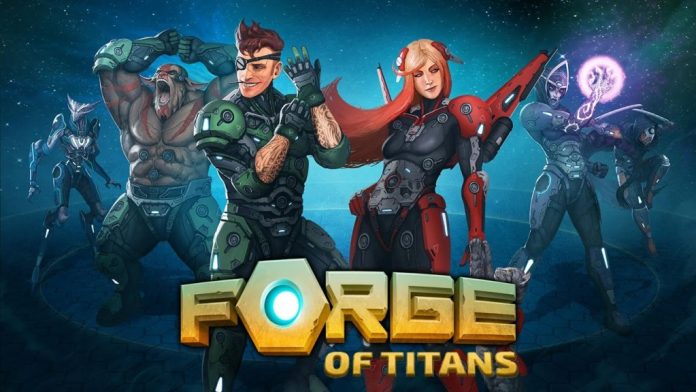 Forge of Titans has just been launched by Winko Games and Kongregate on iOS and Android under the name of Forge of Titans: Mech Wars. Giving us the chance of controlling amazing Titans into battle and facing human opponents, as well as AI-controlled ones, this game is beautiful and addictive. And we’re here to make things easier for you by sharing a bunch of Forge of Titans tips and cheats to help you unlock all titans and get the most out of this game.

Things are pretty much straightforward in Forge of Titans, but a few more tips and tricks can never hurt, especially since battles can prove to be a bit chaotic eventually. So let’s learn how to get the most out of the game by checking out below some Forge of Titans cheats and tips in our complete strategy guide!

1. Check out the academy constantly
Right now, the game doesn’t give you a visual indicator when you have new skill points to spend on your Pilots in the Academy, so make sure to remember and tap it constantly, then spend those skill points to improve the skills of your pilots. You get one free point per 10 minutes, but they max out at five, so that’s why you have to check often and spend them often if you want to keep your Titans and Pilots in top shape.

2. Complete the missions
There seems to be a ton and three quarters of missions available in the game, all of them rewarding you with Premium currency which can be spent on important things to level up your Titans, unlock new ones or new parts. So check out the missions after playing a while and try to complete as many as possible. Don’t forget that there are four types of missions for you to browse through: Battle Missions, Army Goals and Colony Growth (which can be considered story missions) and the Daily Tasks which obviously refresh daily. Do them all and get a ton of premium currency!

3. Watch the ads for the extra Money!
You can watch an ad in the game every now and then for 10 free Premium currency and you should do this whenever you have the chance. Every now and then, the game will also give you the option to watch an ad before starting a battle, which would give your Titans an attack bonus for the next 30 minutes. If you think you will be able to play multiple battles during this period of time, you should take advantage of this as well – it’s especially useful in PvP Battles!

4. Level and Rank Up your Titans
Titans are leveled up by using equipment you don’t need. Simply tap the Titan you want to level up in the Hangar, then add the equipment to level them up. Have in mind that the same equipment can be used to level up any Titans, so make sure you focus on the one you really want upgraded at that moment – especially since new pieces of equipment are pretty difficult to get in the long run.

Once a Titan reaches maximum level, you can rank them up using artifacts. This unlocks a new skill the first time you do it, makes them stronger and also increases the maximum level. So you can start leveling them up again, then ranking them up and so on. It’s a process you have to keep on doing in order to keep your Titans strong and ready to win battles.

5. How to win battles easily
No matter if you are playing against other players or in the Campaign, there are some things you should have in mind when starting a battle. As soon as you unlock the option of sending two Titans into battle (which is really soon), the entire battle system can get pretty chaotic and changing from Titan to Titan, giving them instructions, activating skills and so on is a bit more difficult to do – as well as it is to keep track of everything happening on the map.

This is the reason why you should always use the Tactical View in battles. You basically have to hit the Pause button, select your Titans one by one and give instructions to each, then hit the play button so that the battle unfolds and keep an eye on your Titans. Keep tapping the pause button every time one of your Titans completes its task (usually destroying an obstacle or turret) and give new instructions. If you’re trying to do everything live, you have more chances of losing – especially later on in the game when battles are not that easy anymore. So make it your habit to play battle using the Pause button at all times.

When in the battle itself, your main goal is that of destroying all the turrets. For doing so in the Campaign, you will get extra rewards, so this is a really important part. Target closer turrets first and go for the ones that offer shield first because taking them out makes things a lot more easier in the long run. Take advantage of the skills and strengths of your Titans as well: for example, using the Hound’s missiles on a group of turrets deals massive damage to them all and takes them out faster.

On most occasions, I saw that targeting different turrets with each of your Titans is better than keeping your Titans close together and attacking the same turret. It’s also better to destroy the turrets first and only afterwards go for the defending Titan as they usually take longer to be defeated and you don’t need the extra damage dealt by existing turrets.

Finally, remember to always activate your Titans’ skills and use them on the right enemy or at the right time. Don’t hesitate to pause the game and spend as much time as you need in the Tactical view in order to get a better understanding of the battlefield and deciding on the best approach for the battle.

6. Don’t forget about your base’s defense!
Set your defense early on and check that area often in order to reduce chances your opponents have when attacking you. Keep your strongest Titan defending the base and have them in the middle, so that they quickly get close the the enemy Titan and hopefully keep it busy while the defensive buildings cause damage.

Work on your placements and test your defenses to see what goes best, but the idea is to try and keep your turrets as far away from the enemy as possible, while also keeping the enemy in their range.

8. Join an active Alliance
Being part of an active, solid alliance is vital – not only that Alliance Wars will become a reality soon, probably coming with amazing rewards as well – but especially because you can send (and receive) items to fellow alliance members. There are no limits on the types of things you can send and receive, including Artifacts and Parts for your Titans. This can prove to be insanely useful so make sure you become part of an active alliance ASAP!