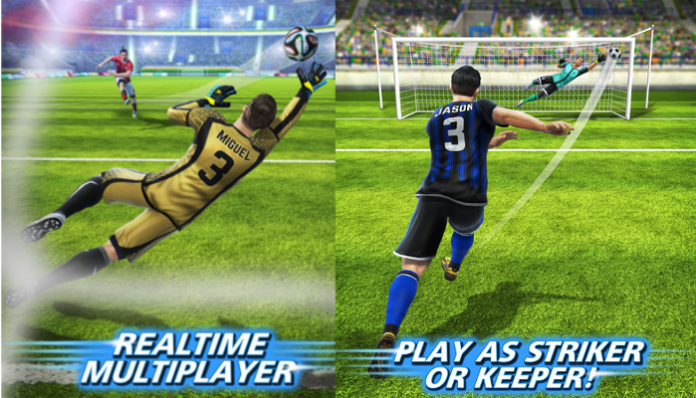 Become the ultimate striker in Football Strike, a easy to pick up and play one-touch football game! Start your adventure in Shooting Race where you compete with players around the world in a race to see who can kick as many target goals as possible! Next is Free Kicks which lets you take turns with another player defending a goal. You’ll need your reflex for this game, so our Football Strike cheats and tips will help you hone your skills!

Football Strike is a fun game that you can enjoy anywhere, as the matches are lightning quick. Don’t rest though – there’s lots of challenge here! Let’s get started with our Football Strike cheats, tips and tricks strategy guide!

Line up your shots!

Your ball will travel exactly along the line you trace with your finger. Try to draw a line from the ball to the center of a target. Keep in mind that the shorter your line, the softer your shot will be, but this only really matters during goal defense. Keep your finger straight, draw quick but accurate lines, and your shots should be on point! Always aim for the center of the target as it’ll charge your ball faster.

Take advantage of the charged shots!

Hitting targets will fill up your charge meter at the top left. When this fills up all the way, your ball will become charged and your next shot will be worth double the points! Like we mentioned, hitting the center of the targets will fill up your charge faster so be as accurate as you can be. Take advantage of the charged shot and do not waste it – if you miss with a charged ball, that’s it! You’ll have to build up another before you have another go.

One more thing: sometimes you’ll activate a Lucky Ball. The Lucky Ball activates at random, hence the name, and it functions exactly the same as the charged ball. Nail the target for a whopping four points!

Patience is key during Free Shots!

It may sound backwards, but patience is your best friend during free shots. When you’re on defense, wait until the kicker runs up and kicks the ball. Quickly watch his feet to see which way the ball is going, then swipe to block! It’s important to wait until you actually see the ball leave the ground, but of course this means you’ll need quick reflexes. If you try to anticipate the direction you might end up faking yourself out!

Remember that you need to swipe as close to the ball as possible, as there are actually different heights your player will lunge in. Swiping low will make your player dive low while swiping the top half of the screen will make him leap for the ball.

Use tricky shots to throw off the goalie!

When it’s your turn to kick during Free Shots, try to put a little “spin” on your ball – literally! When you’re tracing your shots, you can actually draw a curve line to put some spin on the ball. By doing this you can kick the ball one way but have it curve the opposite way, leading to some tricky shots.

Additionally, try using different amounts of power! Remember how we said that the total length of the line you draw also affects how much power is put into your kick? Short lines that usually stop around the bottom of the goal have little power and travel slower than normal shots. This can actually throw off your opponent, as they might try to jump earlier than expected, only for the ball to fly right over them while they’re on the ground. Stay unpredictable!

That’s all for Football Strike. If you’ve got any other tips or tricks to share, let us know in the comments below!