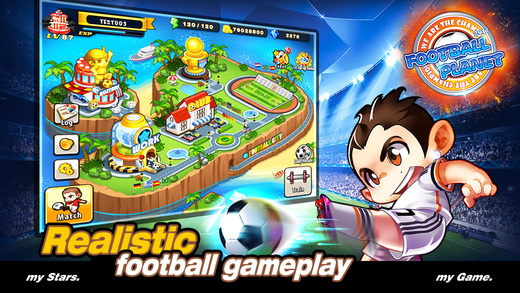 Football Planet is the newest football management game. Recruit and build the ultimate team of footballers. Train them to improve their stats and watch each match play out in real-time speed! Go head-to-head against other players to see who’s the best football manager of them all! We’ll help you raise the ultimate team with our Football Planet cheats, tips and tricks strategy guide!

1. Collect all the freebies!

First off, we have the server launch gift since the game just launched. This gift can be collected every few minutes or so, and it contains nice, simple gifts such as gold and experience boosts. Next up is the login gift, which gives you better rewards for each consecutive day you play the game. Finally come the level up gifts. Once you reach a certain level, you can open up one of these free packages containing some nice goodies. Get everything!!

Since there is no direct player involvement during the matches, the outcome of a match depends solely on how trained your players are. You can upgrade your players in a multitude of ways: you can sacrifice older players to power them up, you can outfit them with various equipment, and you can equip them with special boosters known as “Potential”. The main method you’ll be using of course is the upgrade function where you can use your old players to power up your better players.

As you complete the main campaign matches, you will sometimes earn new players. Most of the time they will be D rank, which is fine since you can use them for upgrading your better players. However, sometimes you’ll receive higher rank players, such as C and above. You should move these players onto your team as all of your starting members are D rank. Higher ranked players have better stat growth potential.

4. Use the Star Factory for super high rank players!

Although you will get some pretty good players by doing the campaign matches, nothing will ever match the rarity of the Star Factory. At the Star Factory, you can spend diamonds for a chance to win a rare high rank player. It is important to note that you get to try the Rare and Super Rare draw for free every six and twenty four hours respectively. This means that you can do a super rare draw for free once every day. Don’t miss out on it!

Daily missions are assigned to you per week. You can get up to four chests by doing the daily missions, so try your best to complete them. You can check them on the main menu. Each mission is worth a set amount of points, and once you reach a certain threshold you will be rewarded a chest.

Adding friends lets you practice against them for fun and to test out your team without any negative consequences. Also, you can collect free stamina from them once a day so that’s really useful. Additionally you can greet them which nets you friendship points, but the game doesn’t really explain what you can use friendship points for. It’s got to be good, though!

That’s all for Football Planet. If you have any other tips or strategies to share, leave a comment below!