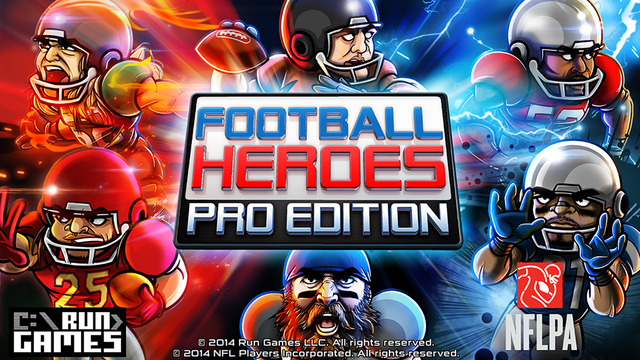 It’s time to build the ultimate football team in the universe! Football Heroes: Pro Edition is an action sports game that puts you right in the gridiron. Take control of your team and run them to victory with simple, intuitive touch controls! We’ll help you power up your players to create the best team ever with our Football Heroes: Pro Edition cheats, tips and tricks strategy guide!

1. Attack with shoves instead of tackles!

If you swipe your finger across your screen, your player will perform a tackle. These almost always instantly take down any opponent, but leave you wide open afterwards. Your player is stuck in the recovery animation for a little while, so it’s very detrimental if you miss. Instead of tackling, you should shove, which is done by just tapping the screen. You can shove in quick succession, and about four or five shoves is enough to take down an opponent. Shoves are lightning fast so they’re much more useful than tackles.

2. When they’ve got the ball, run straight for the quarterback!

Something we’ve noticed during our time with Football Heroes is that the computer quarterbacks take their sweet time when doing a play, whether it be running it in or passing. You know what that means! Take control of a player that’s on the end lines and when you’re in action, head straight for the quarterback. Usually, your center line will hold off all the other opponents and if any of them get through you can just shove them down. Shove the quarterback down as fast as you can for an easy sack. This is a great way to gain ground on the opposing team!

3. Be ready to juke if you see a tackle coming!

When you’re approached by an opponent, they usually opt for shoves. They don’t shove nearly as fast you can though, so you can take them down with relative ease. The real thing to watch out for is when they try to tackle you. When you see an opponent begin to flash a vibrant orange yellow, get ready to juke! To dodge, all you need to do is swipe when you have the ball and your player will do a dodge spin.

4. Try out coin battle for some extra hero coins!

A coin battle match plays out like a regular match, but you each attempt requires a certain amount of coins. The stakes are a little higher as the computer AI is a bit tougher, but you get double your entry fee if you win! If you need some extra coins, try this mode out.

5. Be sure to use your super moves!

Some of your players will have special abilities that can be activated during a match. These can be incredibly useful, so be sure to utilize them! When you first start out, probably only one of your players is going to have any super moves. Figure out which one has them and try to remember their name, so that way when you’re playing in a match you can switch to them on the fly and use their super moves.

Football will never be the same again, so we hope this guide gave you a launch for starting your ultimate team. If you have any other questions or suggestions, leave a comment below!