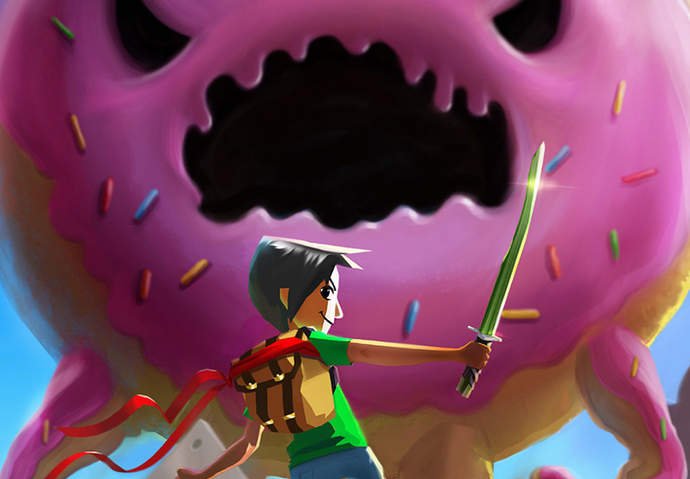 A brand new quirky RPG has made its way on the App Store under the name of Food Battle: The Game. Despite its colorful graphics and ability to poke fun at itself, it’s a really good game that I have completely enjoyed playing. It’s also a pretty difficult game too – more difficult than “battle donuts” might make you think it would be. So I am here to share with you a bunch of Food Battle: The Game tips cheats and tips that will hopefully help you get forward and with three star ratings as well.

So if you got stuck playing or you simply want to improve your strategy to get all the three star ratings on all levels, check out our Food Battle tips and cheats below and keep on going!

1. Destroy everything
I am not talking only about the donut monsters here, which are pretty obvious targets. I am talking about all the other things, like grass and chests: explore all areas and destroy them all to collect all treasure, find hidden stars and goodies. Oh, and hidden triggers too, which will make your life a lot easier. So make sure that you always clear the area out before you go-go.

2. Ranged attacks are da bomb
The main idea behind staying alive is not being damaged by the attacks of the donuts. So use ranged attacks as often as possible: you can usually complete all levels with ranged attacks only. Just attack as many times as possible, then run around while your attack bar replenishes, then keep doing this. Safest way around.

3. Use donuts to defeat your enemies
Some donuts cause collateral damage, like the Pink one, so it might be wise, in some occasions, to allow it work its magic on its donut friends. Stay close and as soon as it prepares for an attack, swipe away. It will cause splash damage to everything around, usually destroying the smaller donuts around.

4. Swipe and roll
The easiest way to move around quickly when dealing with enemies (especially bosses) is to swipe and roll instead of just running. The first boss in the game can actually be easily avoided if you roll when he jumps into the air, and the same can be said about all the other donuts. So master this technique and make it your main way of moving around.

5. Replay levels
Some stages can’t be beaten on three stars from start because you won’t have the required weapons to open some of the areas, so replay each stage. This way you get more ingredients too, as well as coins. What can be better?

6. Spend diamonds wisely
You get a bunch of free diamonds when you start the game and you can collect a few more playing the levels. Spend them wisely, though, as they are indeed premium currency. You can get extra clothes that increase your health (which I would recommend) or get extra ingredients (which I don’t really recommend since you will get them playing the levels, eventually). However, use the diamonds wisely!

These would be, for now, our Food Battle: The Game tips for you. As soon as we find more, and some real cheats, we’ll make sure to share them with you!