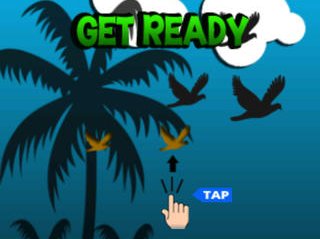 Now that Flappy Bird has been removed from the App Store, there is a multitude of games trying to grab that number one spot and even though none manages to be as addictive and difficult as the original, they must be appreciated for giving it a go. Fly Birdie is such a game and we’re going to talk strategy here in this article where you will find all the Fly Birdie cheats, actually a set of tips and tricks that will keep you going and help you push for the high score that you always wanted.

So let’s not waste any time and let’s check out below some Fly Birdie tips and tricks!

1. Don’t look at the lives counter
Unlike the original, Fly Birdie gives you three lives, which means that you can hit the pipes three times before getting the game over message. You would be tempted, therefore, to keep an eye on that counter, but it doesn’t really help. Just play that game as if you had just one life and ignore the others. When it’s game over, it’s game over – if you keep looking, you lose focus and you’ll lose faster.

2. Don’t go down
Indefinitely on the number of lives that you have left, if the bird falls down at the bottom of the screen, it’s game over. So keep it flying at all times!

3. Quick and short taps do the trick
I find it a lot easier to control the bird by tapping the screen fast instead of slow and longer taps. The space between the pipes is big enough to allow you to tap once or even twice while in between without worrying about hitting the top, so go for the light, continuous taps that allow you to control the height of the bird instead of short, long taps.

4. Do not pause the game
When you are on a roll and you want or need to take a break, don’t hit the pause button – most likely, you will lose when you start over because you’ll already be in the middle of the game and you will lose momentum.

5. Don’t try to multitask
Just as it was the case of the original Flappy Bird, in Fly Birdie you should focus on the game itself and nothing else. Even though it is a lot easier that the title that started this whole madness, a single second could cost you a life – or all three of them, so stay focused!

6. Go over the top of the pipes and keep tapping there, nothing will happen to your bird as you keep rolling to a humongous high score (Thanks for sharing, Johny)

And these would be our Fly Birdie tips and tricks that will surely help you get the most out of the game. If you have other suggestions, don’t hesitate to write them down. Also, let us know how far did you manage to go and what is your current high score!