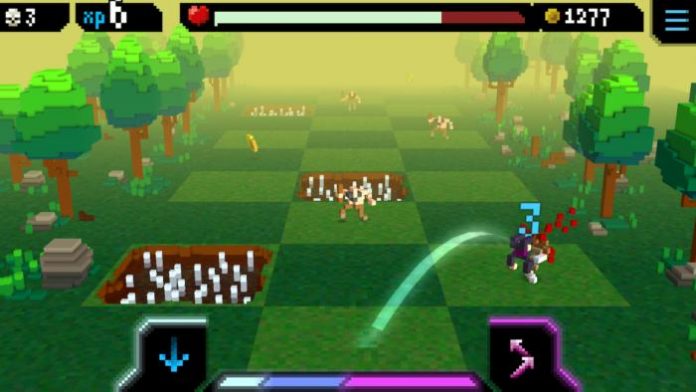 Are you ready to become a flipping master? Let’s get to flipping with our Flipping Legend cheats, tips and tricks strategy guide!

Keep your eyes on patterns!

As you flip through the fantasy world of Flipping Legend, it’s helps to keep your eyes on the floor checkered patterns. Because you need to make decisions quickly since you’re constantly losing health, stopping and staying in one spot for too long can be a severe detriment, so you’ll need to get used to thinking on the fly. If you ever get confused on which way to flip at crossroads, it sometimes helps to note the type of tile you’re looking at.

Once you start recognizing patterns, you’ll be able to flip quicker because instead of just looking for the path to go, you can simply look at the floor pattern to prevent yourself from getting confused.

Every ten hours you’ll receive a daily quest. These quests can be quite lengthy, so start working on them as soon as you can. Upon completion you’ll be granted a free chest which can contain new skins for your heroes but more importantly precious gold that you can spend on skill upgrades!

Don’t worry about the coins!

Each coin pick up is worth a whopping… one gold. You’ll quickly notice that this isn’t viable at all and you’re going to be spending a lot of time picking up gold coins if you want to afford the later upgrades. Instead, we recommend just ignoring the coins altogether, with some exceptions. If you see a fast-spinning coin, grab it – it’s a multiplier pick up. This temporary power up will make all coins worth 3 instead of 1, but it only lasts for a couple of seconds.

Sometimes you’ll find coins larger than normal. These big coins are always worth 3 coins, so they’re basically a normal coin but if you had the multiplier active. Grab these too, but most of the time you can ignore the regular coins. It’s just not worth confusing yourself for one gold. Of course, if they’re just sitting there in plain sight with no obstacles around, go ahead and go for it.

Each character has two abilities. A basic ability that sometimes attacks and sends your character backwards one space, and an ultimate ability that wipes out multiple enemies. The basic ability costs one segment of your ability bar while the ultimate needs all three. It’s easy to forget about your basic ability when your ultimate is so powerful, but it can help you reposition yourself!

If you’re not aligned with a power up or enemy, you can use your basic ability to correct yourself. Don’t be shy – the ability bar recharges fairly quickly so don’t hesitate to use it.

That’s all of the tips we have for Flipping Legend so far! If you’ve got any other flipping tips or tricks to share, let us know in the comments!