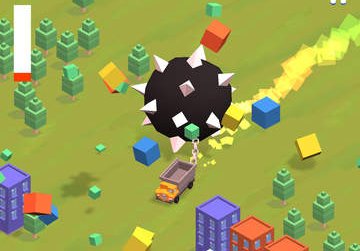 Bulkypix have launched a brand new “let me try one more time” type of game that is actually a lot more interesting than you might think the first time you play it, as there is more than one city for you to destroy and a ton of stuff for you to pick up during your rides. It’s not going to be an easy ride, though – even though mass destruction certainly doesn’t sound too difficult when you have a huge vehicle with an even bigger flail attached to its read – and I am here to help you with some Flail Rider cheats and tips to get a better high score and achieve maximum destruction.

So let’s not waste any time and let’s check out Touch, Tap, Play’s Flail Rider tips and cheats below!

1. Run in circles
I found this as soon as I started to play and it still seems to be the best approach when it comes to mass destruction: run in circles, adjusting the direction of your car slightly, aiming for the areas with most buildings first. If you run in circles, your risk of hitting the buildings decreases (and gets lower as you master this technique) and you ca also get all power-ups and destroy everything around.

2. Pick up the power-ups
As you destroy buildings, they will reveal different power-ups and you should try to get them all as you play, especially the ones that are not coins as they usually give you incredible powers. One of the most important is the extra time, as well as the invincibility power-up which allows your car to go through buildings and destroy them. Now that’s a big bonus!

3. Don’t worry about the time
Even though you’re also in a race around the clock, if you play at least decent, you shouldn’t worry about the time and lack of it because you will be rewarded with a ton of extra timer power-ups. So don’t rush things and take it slowly: time will not be a problem as long as you can cause destruction!

4. Larger cars are better
I am not 100% sure about this, but it seems that larger cars are a bit easier to control. Maybe it’s just an illusion I get from getting better at the game, but it’s worth trying out. So if you have large cars available, try them as your game might improve.

5. Warp into another dimension
As soon as you cause enough destruction in a region, you can warp to another dimension. You will know when that’s possible because an arrow will appear in front of your car: follow it and warp, but remember that you don’t have to – as long as you still have buildings to destroy, you can easily stay in the current dimension, even though the new one will give you even more chances to increase your score and keep on playing.

These would be for now our Flail Rider tips and tricks. If you have other suggestions, let us know by commenting below.