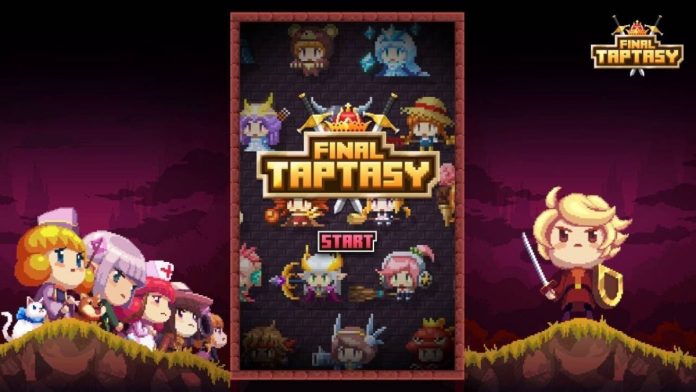 Final Taptasy is a really nice and pretty unique endless tapping game with interesting new mechanics that you don’t usually see in such titles. I personally love it a lot and I am sure you are in a similar situation. If so, I am here to share with you some Final Taptasy cheats: tips and tricks for a complete strategy guide. There are surely things that you are not aware of in this article, so let’s get this started because we have a princess (or more) to save!

1. Level up your Heroes and Allies
You should do your best to keep leveling up your Heroes and allies at all times, but have in mind that in the case of your Allies (the ones that do damage per second), their skills at levels 25 and 75 are usually extremely useful. You can just tap the skills of your Allies even if you haven’t unlocked them to see what bonuses they give and at which levels, then plan leveling them up accordingly.

Also, it’s the Allies that decide how much you earn while you are away, so the higher the level of your Allies, the more gold you can accumulate while not playing the game.

2. Tap a lot
It might not seem so, but attack damage, mana generation and healing increase by tapping. So the more times you tap per second, the bigger the effect. There are 5 total levels of bonuses that you get based on how many times you tap per second, with the first two giving no bonus, but from level 3 and up you will receive 10 to 30% extra Hero attack damage, as well as split damage.

Therefore, tapping with as many fingers as possible is the best idea: so use more than one finger and if you have the chance (e.g. if you are playing on a tablet) use both hands. This way you will tap a lot of times per second! And don’t forget to actually tap those chests that you unlock while playing – there are a lot of goodies inside!

3. Upgrade your Skills
Skills are unleashed by you, whenever you choose (and when you have enough mana for them). Upgrading the skills is really important, because they can give you a big advantage in battle. Just have in mind that the mana maxes out at 5, so plan your uses right because it’s a waste of mana, normally, if you have it maxed at five and not using your skills!

4. Rebirth to get most of your keys
Unlike most other endless tapping games out there, you can rebirth pretty often and starting early in Final Taptasy. Take advantage of this and rebirth each time you have the chance: at stage 1-10, 2-10, 3-10 and so on. You will get, no matter what, 50 Keys per rebirth up to stage 10-10, then you will receive even more. So rebirth often and use all your keys to open new treasures.

5. Get skins for your Heroes and Allies
You can purchase Skins for your Heroes and/or Allies, but they cost diamonds/premium currency. The good thing about Skins is not only that they give you amazing bonuses, but they also stick with you even after rebirths, so you will never lose those bonuses. Plus, they look really cool! Just have in mind that you should only purchase one skin for each Hero or Ally as the effects don’t stack.

6. Save often!
The game apparently doesn’t save progress automatically, so you should save manually in case there are problems with your game. In order to save your progress, tap the Settings icon (wheel button in the upper right corner) and tap the Save icon. You can Load your data from the cloud at any point, but have in mind that you can only load data once every 15 days.

7. Complete the Quests
Especially early on after Rebirth, quests are extremely simple and you can complete a ton of them quickly. Just make sure to collect the rewards after completing a quest because this unlocks new quests and therefore you will make even more money.

These would be, for now, our Final Taptasy tips and tricks. Do you have anything else to add? Let us know by commenting below.