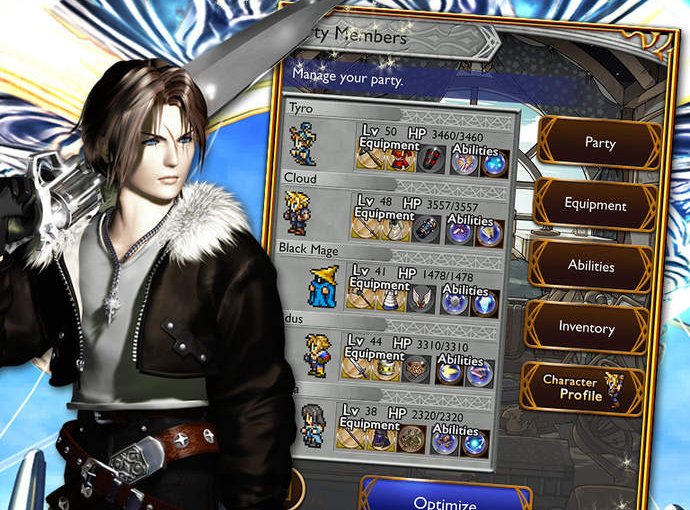 In this article, we’re going to share mostly tips for beginner players, but even advanced ones should check them out too – maybe they find something they didn’t knew already. So let’s not waste any time and let’s check out below TTP’s FFRK cheats and tips / Final Fantasy Record Keeper tips!

1. Always consider the realm marks
If you bring a character or piece of equipment from a specific scene into play into that specific scene, you will get a boost of stats and experience points gained, so you should always pay attention to that when starting a new scene. Fortunately, you don’t have to be an expert in Final Fantasy to be able to do that – just look for a glowing sign on your characters in your party or the indicator of which Final Fantasy game they’re from and you will do it without a problem.

2. Use the party’s skills carefully
Apart from the basic attack and defend options, your party members have some special attacks or skills that they can use, but they can only use it for the number of times indicated above the skill. However, since these numbers reset after leveling up, you should make sure that you use them all before that in order to get the most from your characters. Try to learn which skills are better against which types of enemies and use them wisely to gain an advantage in battle. Extra tip: Always keep an eye on the XP meter of your party members and when they’re close to leveling up, use up all their skills in the next battle!

3. Keep your best for the boss battle
Each scene has a boss battle in the final round. I would suggest keeping a few special abilities and the Special Attack/Skill for that battle, because it’s the boss battles that are usually the real challenges and quite difficult to defeat. But if you pack a major punch with all the special skills, you’re going to have an easier time there.

5. Edit the formation
In your Party menu, make sure to tap the “Formation” button to edit your party’s setup – keep the high health members up front and the low health ones at the back. This improves your chances of winning and is usually overlooked.

7. Create & Hone abilities
In FFRK, you have the option to equip your characters with abilities. However, you generally have to create these abilities and hone them (improve them) using orbs. It’s really difficult to unlock all the abilities and especially hone them to decent levels, so check them all out – there are 5 categories, so you really have a ton of options and focus on getting the materials for your favorite ones. Then hone them to improve their effects.

8. Upgrade & Combine equipment
Something similar goes with the equipment as well: not only that you can upgrade your existing equipment using items that you no longer need, but once you max them out, you can combine them with the same type of equipment to improve their stats and max level. This is something you should always have in mind because the better your equipment, the better the stats of your party members.

9. Auto combat usually works just fine
I still haven’t reached a point where auto combat doesn’t work flawlessly for me and I really recommend it to save some time. However, I would always manually control the party members in the last round to make sure that I reach the boss at the end fully charged and with enough Abilities left.

This would be all that we have for now in terms of Final Fantasy Record Keeper tips and strategy, but we’re working on more advanced guides too, so make sure to check back soon! And if you have some extra tips to share, don’t hesitate to do so by commenting below!