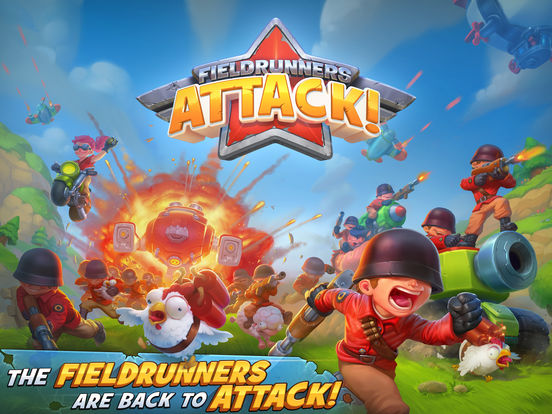 The long running tower defense series Fieldrunners is back with an all new game: Fieldrunners Attack! This new game plays more like a base building and raiding game, similar to Clash of Clans and Boom Beach. Don’t worry though, as Fieldrunners Attack has all of the unit designs and towers that you know and love! You’ll recruit troops, build bases, and seek domination over other players by raiding them! We’ll help you get started with our Fieldrunners Attack cheats, tips and tricks strategy guide!

Unlike most other games in the base raiding genre, Fieldrunners Attack does not grant you full resource bonus if you go for the enemy HQ right off the bat. Destroying the enemy HQ immediately at the start of a raid will result in minimum resource pillaging! You’ll need to actually destroy the other starred buildings before you go for the headquarters. Of course, if things are looking a little grim for your troops, you can opt for a quick victory by focusing on the HQ. Remember to keep upgrading your Loot Transport to increase the amount of resources you can pillage!

2. Knock out the power stations!

Each type of hero and troop has strengths and weakness. Let’s take a look at the default Soldier troop. Soldiers have all-around stats and are pretty flexible. They excel at taking our railgun towers, but they burn really fast to Flame Towers. Make sure you’re using the right troop for the job! Study up on all of your troops’ strengths and weaknesses to make the best use out of them.

Unlike a lot of other base raiding games, you can actually move your squads around as much as you like when you’re raiding. You don’t have to deploy a flare that costs resources or anything like that! You’re free to move any group of units whenever you want, wherever you want. You can take advantage of this by doing things like scooting around turrets by hanging just out of their reach, performing hit and runs, distracting turrets, and so forth. A good thing to master is to control each squad individually. You can either order issues individually or to your entire army. Let’s say you’re going up against some Flame Towers. You can send tanks in first to grab the attention of the towers, then have your soldiers flank the towers to overwhelm them!

That’s all for Fieldrunners Attack. If you have any other strategies to share, let us know in the comments below!