Soar the skies using extremely advanced boots that are powered by pure magical energy in Kick-Flight, a new arena anime fighting game. Choose your Kicker, strap on your boots, and let’s take to the skies in this fully three-dimensional action game!

In Kick-Flight, players will face off in a adrenaline-fueled 3-minute battle, featuring four players on each team fighting it out. Work together with your team as you fight to take down the enemy Kickers using a wide variety of mid-air acrobatic moves and techniques.

Kick-Flight gives you full free-form control over your Kicker when you are in the air. Boost to gain air, get the drop on your enemies by literally dropping in on them from high up in the sky, and pursue stragglers that are trying to escape – it is all possible with the help of those fancy boots!

And for the particularly stubborn opponents, some Kickers have weapons that can force players into unfavorable situations! With the force of a mighty hammer, you can slam dunk players straight into the ground, or you can knock them high up into the sky to throw off their orientation.

Each Kicker has their own way of fighting and moving around the arena, so it is up to you to master the aerial acrobatics and become a fearsome flier! Kick-Flight is scheduled to release on February 15, 2020 on iOS and Android. 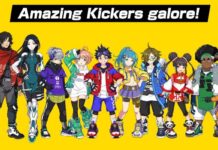