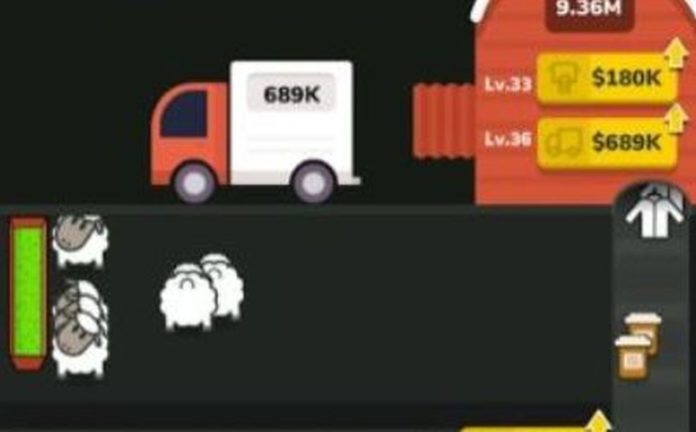 The Farm Factory tips and cheats we are going to share with you in today’s article are going to help you unlock all the farm animals and all the boosts. If you love this type of games as much as I do, then you’re going to have a blast learning that you’ll have a Unicorn on your farm!

Since you don’t have to be in the game non stop 24/7, you can progress even when you are offline! That’s a great way to keep your farm running while you are going about with your every day life.

So, are you ready to put on your cowboy hat and learn a thing or two about life on the farm? Then let’s dive right into the Farm Factory tips and tricks!

Pass through the first stages quickly

This tip will help you pass through the difficult (and extremely boring) start. Well, it is not difficult per se, but rather annoying because it is slow. In order to make this faster, I am going to tell you exactly how to do everything step by step.

Firstly, for the let’s say 40 seconds of the game you’ll need to tap on the Cow and make more Cow purchases. Once you have a few, you might want to tap on the conveyor belt to speed things up a little. Also, tap on the truck too! 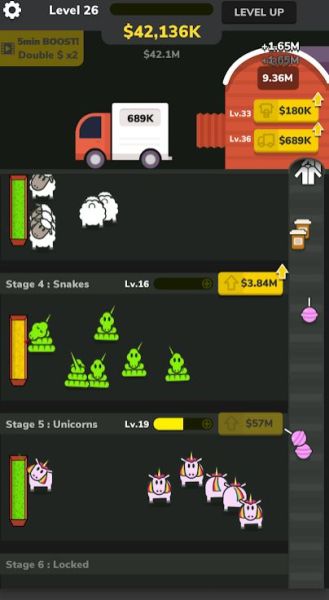 After you’ve done this for a short while, you’ll see some crates parachuting down your screen. take advantage of these crates and watch every ad possible to speed things up and gather more money.

In the game there are 3 types of crates that could appear on your screen. They are these:

– Support Crate: gives you an amount of money proportional to your level.

– Time Machine: will speed up time.

– Speed Up Crate: will speed up everything that is going on around the farm production wise.

When you open one of these crates you will have the opportunity to watch an advertisement in exchange for the boost that it gives. I think it’s a very fair price to pay, since they will double basically the amount you’d normally get.

There will be several upgrades you can do to the farm, and they will all cost money. I suggest that you first upgrade all of the fields in the farm to 100, as that will be the maximum. Let’s take a look at what all the upgrades give! 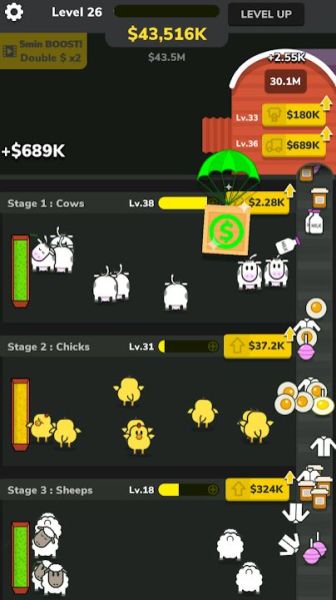 – increased production: they give more money per item produced

– increased capacity: can store up more items coming from the belt

The most important ones are the Truck upgrade and the animals, but don’t neglect the Barn upgrades either. I suggest that you make all the upgrades somewhat equal, and slightly lean more towards the animals, as they have an extra bonus! (more details about this below)

Whenever you reach level 100 with an animal field, you can choose to watch an advertisement and reset it. You can and should do this, as it will increase the production speed and even an overall profit bonus! 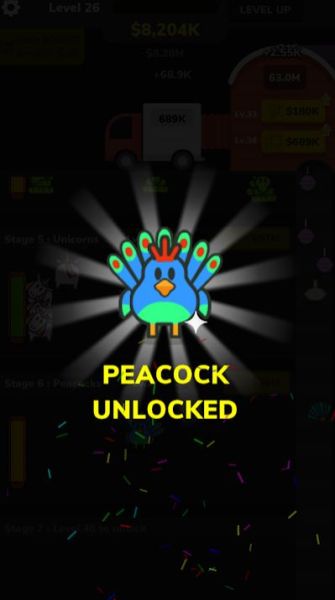 I suggest resetting the Cow level this as soon as you unlock the Unicorns, and keep on upgrading them! You will start with the Cows, then move to the Chicks and so on. The very maxed out Cow level will give 20.6k/s for example, so it is definitely worth it!

Level up and unlock more animals

As you level up you will unlock more and more animals. You want Snakes? Unicorns? You can unlock them all! Every 5 levels you will be able to unlock a new one, so it’s definitely worth it!

You’ll love ads after this game!

Once you start playing Farm factory you will encounter ads after ads, each coming with their own benefits. It’s the best if you take advantage of these ads, as they will boost your income and speed and everything pretty much!

Pay especially much attention to the boosts in the top left of the screen! The “5 min BOOST!” is good because if you watch that and another one quickly after, it will become a 30 minute boost!

This will double all the gold you get for that time, so it is super good if you want to get more money quickly!

It’s good when it all moves quickly, right? Well then, try to combine the boosts for some uber buffs! If you have the double income, then try to activate some time speeders too! Tap and be active in the game while doing this, and your income will skyrocket! 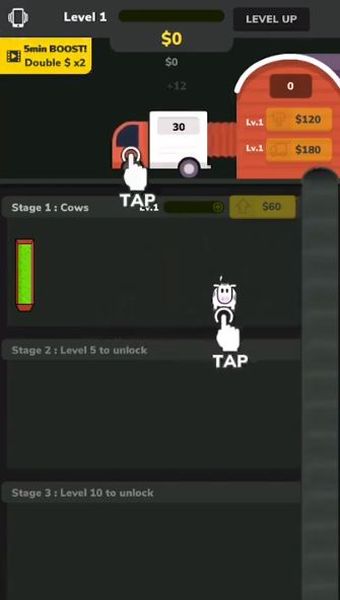 It’s a really nice and easy way to make more money in a very short amount of time!

Unlock stages before you reach the required level

How, you may wonder? Well, it’s super easy! You will need to be 1-2 levels below the required level, and have the patience to watch 2 advertisements! By watching 2 ads you will unlock the following level, so you might want to build up the patience and do this!

These would be all of our Farm Factory tips and tricks that we’ve got right now! If you know some other cool tips and suggestions for the game, then leave them down in the comments below to be shared with everybody!