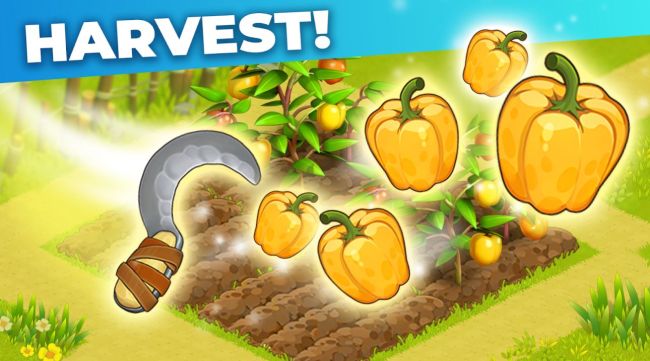 In today’s article we are going to dive into the Family Island – Farm Game Adventure tips and cheats to help you create a good farm and become a prosperous farmer!

There are quite a lot of things to do in this game, and if you are one of those people who likes to spend your whole day relaxing and farming in a game, you will have the possibility to do just that in Family Island, as this game is super relaxing and will let you build everything from scratch!

From legit cave people to a slightly more advanced civilization, you will have quite a few things to do and tackle, and since you came here to learn all about it, let’s not waste another second and check out all of the Family Island – Farm Game Adventure tips and tricks right here below!

Be on the lookout for the red gems on the ground

Whenever you are spotting some red gems on the ground you should make sure that you pick them up immediately because they will give you Energy, EXP and possibly some other gifts such as Rubies!

I definitely suggest that you pick those up, as well as every other resource that gets a gift icon on top when you tap on it. Those will give you most often tons of Energy and will help you clear out the areas quicker and advance in the farm fast.

Resources may be hidden

Sometimes the game will ask you to collect some resources which at first glance you might not notice them anywhere around the reachable area in your camp. If that is the case, there might be a situation where the resource the game asks of you is hidden!

That happened to me in the very early stages of the game, where I had to look for seashells (a starfish actually). I easily spotted one laying in the sand, but for the second one I had to remove the bushes in the bottom right corner and that’s where that little starfish was hidden!

If that happens to you, simply start collecting resources which might cover a bigger area and that way you can reveal some hidden resources or gifts!

If you want a fast way to get more EXP and advance in the game, then you should be looking to complete the tasks which are given to you in the left side of the screen. Those tasks are basically your quests and whenever you complete them, you will receive EXP and progress a little in the game.

If you are not sure exactly what the next step in the game should be for you, then I would suggest that you do one of the following: either you try to complete the next quest and see what the requirements for doing that are, or you go ahead and start collecting resources because those will come in handy for multiple reasons – either for building or for producing stuff that you will need to make upgrades.

My tip here: I don’t always like to prioritize the quests, but rather go complete some tasks which I see more necessary, such as collecting a ton of extra materials that I know I will need in the future, and then go ahead an complete multiple quests one after the other for a big EXP boost.

Expand the buildable territory and organize your camp

There will be just this much land that you will be able to build on early on, and that is dictated by the amount of stuff (bushes, rocks, trees, etc) that you have lying around. I would suggest that you try to make this buildable territory as big as possible, by picking up all the small resources which are blocking the way.

Another thing which I would recommend that you do whenever you are building a new structure, be it a farm or a building, is that you pay close attention to where you place it. Since every single tile is pretty important, you want to maximize the space that you can use.

My tip here: In my opinion the best thing you could do is to move your building that you’ve already built and place them pretty packed together, and that will ensure you have a big enough space to build in the future. Don’t let your buildings be placed as the game put them for you, and instead move them around as you see fit.

In the Shop you will notice fairly early on a big totem which you can purchase and build. This is called the Totem of Friendship and it will give you free Energy every single day after a while. I suggest that as soon as you have the possibility to build it, you do so immediately because it will start producing Energy for you!

Be mindful of your Energy

The Energy you have is super important, probably one of the most important features in the game! Any action that you will do such as collecting resources will cost Energy and that can really be a huge setback sometimes.

Always have something producing – at all times!

This is a tip which will save you a lot of time and quests and waiting! By always having your farms and material producing buildings busy, you will be creating stuff at all times. That will be super helpful because it will keep materials prepared for you ahead of time.

So make sure that you always have the Mill and everything producing everything that they can, because you will be able to use those materials in moving you forward in the game.

My tip here: I always like to create 2-3 items at all times because it takes time and if I do it non stop, then no matter what the quests ask me to do, I will not fall behind too much (or not at all sometimes) and it will help keep me moving forward.

Restore your Energy for free

There are two main ways of restoring your Energy, so if you want to learn more about it, then let me explain a little:

– You should be looking to collect berry bushes to restore Energy. Those will give you a ton of Energy and that should help you advance. There are two types of berry bushes – blue and red. Try to collect all of them because they are super handy!

– You can cook and place the food on the table to eat to restore some Energy. Simply have some food cooking at all times, and when you want Energy set your people to eat!

This is an option which will pop up on your screen at some point, and if you have a Facebook account you can do it easily! By doing this it will give you 20 Rubies for free, so that will help you speed up the whole process of producing! It’s free Rubies after all, so why not?

The inventory will also play a pretty big part in the game, and if you want to collect more resources and keep moving forward, then you should consider gathering the resources necessary to upgrade it.

Give the Merchant his requests – he will reward you well

In your Home you can spot on the sea a Merchant who will come and ask for stuff. There will be a few milestones in his requests, which will give you Chests when completing them. Make sure that you grant all of his wishes before he sails away, because the last chest that you will receive from him for those requests will give you some good stuff.

Whenever you have the opportunity and Energy, you should go ahead and explore the new lands in search for good stuff. Because you will have most likely exhausted all of the Energy in your main land, you can definitely find a ton of new resources and places to explore in the new areas that you unlock.

So whenever you have some Compasses, you can go explore because it can be quite surprising in a good way!

These would be all of our Family Island – Farm Game Adventure tips and tricks that we have for you right now! Do you know some more useful game tips and strategies that you would like to share with us? Leave them down in the comments section below!