Home Game Guides Exit the Gungeon Guide: Tips & Tricks To Making it Through the... 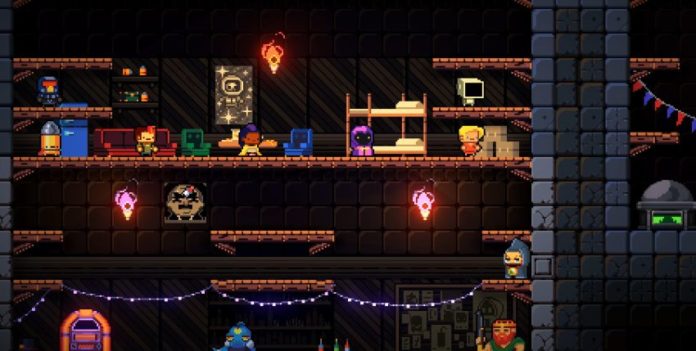 Enter the Gungeon’s long-awaited sequel is finally here, and it is an Apple Arcade exclusive for the time being! This time, we are making a u-turn and going the other way in Exit the Gungeon, a 2D platforming bullet hell. There are still tons of guns and awesome loot to find, but now things play out in a side-scrolling fashion instead of a top-down game.

The dodge roll is your best friend. If you have not played Enter the Gungeon, then you must learn to love the dodge roll. Tap and hold to start the dodging process, which will temporarily slow down time. Drag in any direction to dodge roll or jump in that direction.

During the dodge roll animation, you are completely invincible! You are also invincible for about half a second after the animation is over, so if you are quick enough you can chain dodge rolls to get through a flurry of bullets.

The dodge roll is absolutely crucial to mastering Exit the Gungeon. Remember that time temporarily slows down when you initiate the dodge roll, so if you are expecting some bullets coming your way, be ready to start a dodge roll!

When you slow down time, you can see the trajectory of your dodge. If you dodge straight to the left or right, you will go a short distance. This is a normal dodge roll. If you add a little height to it, you will perform what the game cheeky refers to as an “ascending dodge roll,” aka a jump. You can chain a single straight dodge roll immediately after an ascending dodge roll, which is useful for correction a misplaced jump.

Straight dodge rolls are good for single layers of bullets, as they get you back on your feet again to react to more bullets. Ascending dodge rolls are better for bullet storms, as they generally give you more invincibility time, but it takes longer for you to land.

Take your time and plan out your trajectory, but do not hold it forever, as the game will automatically resume normal time if you wait for too long. You will then automatically dodge in the direction you were facing when time resumed.

One more thing: there is NO cooldown on your dodge roll whatsoever, so there is no shame in frantically swiping your screen to get through a bullet hell.

Initially, there are four playable gungeoneers for you to take control of. They each start out with a unique item that is not initially explained, so we will go over them here.

For beginners, we recommend playing the Hunter, the Marine, or the Convict. The Hunter’s dog companion is a helpful little pooch who can save you if he manages to bring you a well-timed heart item.

The Marine’s Military Training handbook essentially makes him the strongest out of the four starting gungeoneers, thanks to the increase gun effectiveness, which makes him a solid choice as well.

Ideally, you should be taking minimal damage, but the Convict’s passive can turn her into a wrecking ball if she takes a lot of damage within a short period of time. If you are still getting used to the dodge roll, the Convict is a good choice as well.

Attacking enemies or dodging through bullets will build up your combo meter, which is represented by the orange heart at the top right corner of the screen. The heart will slowly fill up as you perform well, and when it fills up all the way, the number in the center of the heart will go up.

This number is your current combo, and the higher your combo is, the more likely you will receive a good gun when it morphs. Build up your combo to around level 4+ to get really good guns!

Beware: if you take any damage at all, your combo will reset back to 1, and your next morph will likely be one of the basic guns. If this happens, do not get distracted and remain focused so that you do not take any further damage. Don’t panic – just built up your combo again!

Remember to use your blanks! It is easy to forget about them in the middle of a fire fight, but they are literal life savers thanks to their screen-clearing abilities. Remember to stock up on blanks from the shop keep when you are going into a new floor of the gungeon, as you never know when you will need them.

You will face many bosses while attempting to exit the Gungeon, with many of them returning from Enter the Gungeon. We have some strategies for some of the bosses here, so have a read!

This naughty kitty is flying around in his own portal-hopping ship. It will stay near the top corners of the screen firing away at you with simple patterns, then it will fly over to the other side of the screen. Meowitzer is one of the earlier bosses you will encounter, so it should not be too much of a problem.

This angry bull is packing a lot of heat! When he first drops into the arena, he will start to fight in a few different patterns. He will shoot slow moving blobs that explode into more projectiles, or he will simply shoot straight at you.

After a few clips, he will get angry and charge into the wall opposite from him, so be sure to get out of the way. When he slams into the wall, debris from the ceiling will fall marked by a red exclamation mark. He can go between walls multiple times, so be careful!

Another one of the early bosses. She simply floats around the top of the screen pelting you with bullets. A large bullet will fly across the screen constantly, so keep an eye on it. Every now and then she will be enraged and she will start spraying bullets in a storm. Keep your distance and you should be able to weave between the bullets.

Occasionally she will throw out two knives into the walls. These knives will shoot bullets at you every now and then, but you can destroy them!

One of the first tough bosses you may come across. He will generally float in his throne near the bottom of the screen and constantly let out a storm of bullets all over the screen while also firing more direct bullets towards you.

Stay on the move to dodge most of his fire, but watch out when he starts ascending – he is starting to charge up his massive bullet burst, which may be tricky avoid. You need to move in between the blind spots, and the pattern is like a swirl, or vortex.

This giant bullet is stationary for the whole fight, but that does not mean he is a pushover! His main attack is to shoot out slow moving “bubble” bullets in a random fashion, and they linger for a while so be careful not to accidentally run into them.

He will occasionally blow up the entire bottom floor, so do not stay down there for too long. He will launch direct bullets at you while pelting you with waves and fireball-type bullets. Look for the opening and dodge roll!

This sentient elevator has got it out for you! Watch the elevator doors in the middle: when it opens and you can see the flames, bullets are about to come out! The Deathvator’s attacks mostly come in waves, but there are some random spray patterns as well. Keep your blanks handy for this fight!

There is one pattern in particular that is tricky. A circle of bullets will come out of the Deathvator, but it will stop moving about halfway through the platform. After a second, it will start up again, and the Deathvator will do this twice in a row, so time your dodge rolls well.

Those are only some of the bosses you will encounter in the gungeon. What other challenges await you?

That’s our guide on Exit the Gungeon for now. If you have any other tips or tricks to share, let us know in the comments below!

Exit the Gungeon Guide: Tips & Tricks To Making it Through the Gungeon