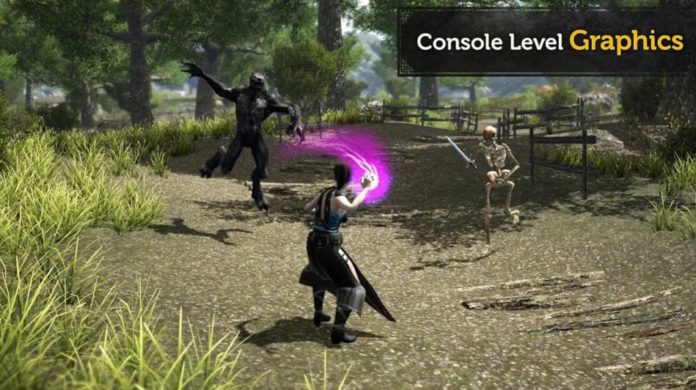 in today’s article we are going to cover all of the Evil Lands tips and cheats to help you become more powerful and easily deal with all of the monsters lurking around every corner.

Much like every other RPG, you will have a ton of things to do, so if you want an action-packed game which still follows the classic RPG style, then this one has everything you might want and more! From pretty graphics, to various play styles, nothing is basically locked so you can try out anything that crosses your mind!

So, are you ready to learn all of the Evil Lands tips and tricks that we have prepared for you? Then let’s dive right into them!

Pick a class that sparks interest in you

Right when launching the game, you will be faced with a major choice – picking a class! Well, as major as it is in every other RPG, here you can play all three classes simultaneously if you have the patience and time!

Basically the very first character you start with should be one that you can find the most appealing for starting the game. The three classes presented to you are:

– Assassin: This class has high speed and relies mostly on swift and deadly attacks, while having high DPS.

– Warrior: The Warrior has balanced defense and attacks, which place him somewhere in the middle. He can take on a few hits, since his defense is high, but his attack is pretty decent too!

– Sorceress: A class which has a super high range and can deal a ton of damage. They don’t really have good defenses, but they make up for that with the range and high attacks.

I prefer the Sorceress class, since I always go for the mages, but if you want to have fun and don’t mind melee damage, then either Assassin or Warrior is going to do just fine. No matter what you pick, it’s not going to be bad, because all of the classes have been created to be able to solo the game’s content one way or another.

Another reason why it’s not such a big deal what you pick first, is because you can change your class at any given time.

If you pick up some good equipment which isn’t for your current class, you can switch and use it for the specific class! All of the inventory storage and character name is shared among all of the classes, so there is freedom to pick basically anything that you find good gears for.

It might seem a little slow at first (compared to other games), but trust me – it’s a good way to gain EXP and items. Check out all of the quests available and try to complete as many as you can at the same time always, because the rewards will be well worth the effort!

You can keep an eye on the map for the orange markings, which basically tell you exactly where you need to go, or what monsters you need to kill. It’s super useful so make sure you accept as many quests as you can (and complete them). Just like every other RPG, it’s a grind at first until you get more powerful!

Keep yourself well-geared at all times

Whenever you fight random monsters, they will have a chance to drop gears for you. When a piece of gear will drop, it depends on the map, location and level of the monster, so it’s obvious that better locations with stronger enemies will drop better gears.

Now you should always make sure you equip the best gear that you pick at all times, especially if it’s for your class. If you pick up a gear which isn’t for your class, you can switch class (as previously mentioned), but do this only if you got some super good drop!

With the Gold that you gathered so far, you can level up your gears, but I suggest doing this only for the better gear that you get later on, and not waste Gold for the beginner gear.

Also, if you want to upgrade that piece of gear, you will need multiples of the same gear, so make sure you keep all of them! They will come in handy sooner or later!

Every time you will level up, you will receive 5 Stat Points, which you are free to allocate however you want, in either Health, Strength, Speed and Luck. I consider these to go hand in hand with the class that you are currently playing, so let me detail more about how I consider them to be better according to the class you play:

– If you are playing an Assassin for example you should invest your points in Speed -> Luck -> Strength -> Health.

– If you are playing Sorceress, you might consider going for Luck -> Speed/ Strength -> Strength / Speed -> Health

– If you are playing Warrior, then definitely prioritize Strength and Health, and then the others depending on what you want more.

You are free to allocate your points as you like, but you should think about this carefully. Another big factor that influences how you spend your Stat Points is how you play. If you are a solo player, make sure you add Health points at all times, because even if you play Sorceress, some enemies will still close the gap and start attacking you.

Try out various Stat Point combos and if you don’t like something, you can change them later on!

Other Evil Lands tips and tricks:

– Claim your Free Chest! Tap on the button in the top right corner of the screen which will open the Shop interface. There, you will see an option which lets you purchase a Free Chest! Make sure you claim this every 4 hours, since it’s useful!

– Buy more Chests in the Shop! In the Shop interface, along with the Free Chest, there are also paid chests. You can spend your Gems to purchase various chests and open them to get gears and other useful loot.

– Don’t go AFK in random places on the map! You will see in the bottom side of the screen a Teleport button which will send you back to the nearest town, or to put it bluntly – safe zone. There, no monsters will attack you, so if you want to leave the game for a while, make sure you do so after Teleporting.

– If you are a single player and you are dealing with a powerful boss which you cannot really take on by yourself, you can use the horn in the top right corner of the screen to shout out to the other players, to come and give you a hand.

– Level up in the areas with the strongest monsters that you can take on. This is a nice way to gain a ton of EXP, good items and progress when you have nothing else to do – or simply want to chill and farm!

– Try out various skills! Depending on the situation you are up against, some skills might prove more useful than others, so definitely try out various combos and don’t neglect any of the skills! The Dash button is especially useful for getting out of “sticky” situations.

– Upgrade your equipment only after you’re sure that you want to keep it! I know that I mentioned this before, but make sure you keep it in mind! Upgrading gear is a real Gold sink, so make sure you don’t waste Gold for early and weak gears.

These would be all of our Evil Lands tips and tricks that we have for you right now! Do you know some other useful game tips that you would like to share with us? Leave them down in the comments section below!