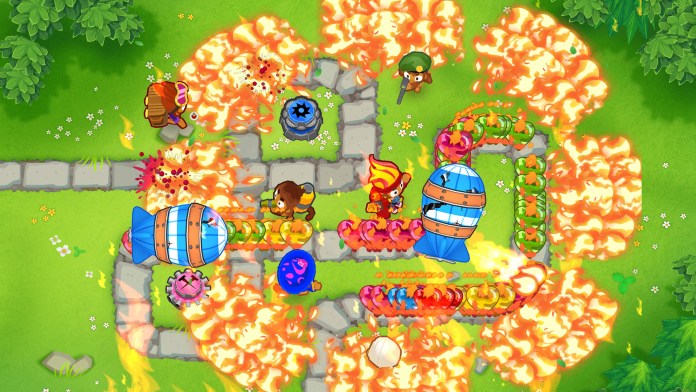 Contested Territories are coming to Bloons TD 6, and here is everything you need to know. They are expected to be added in Version 32.0. Contested Territory is a territorial game mode first introduced in Bloons Monkey City, in BMC Flash, and later added to BMC Mobile. The main goal of this mode is quite simple – the capture of territories to obtain resources. You capture land after completing the requirements for it.

You can re-beat your team scores to make it more difficult for other teams to steal your tiles, but it will consume tickets. Tickets are like the energy of this game mode, every player gets 4 tickets per day to use in this event.

The contested territory will consist of teams of players competing for tiles of territories on a large map. To capture a site, you need to complete the map associated with this site, as well as set a record for 1 of 4 conditions. The above victory conditions include timed tiles (like race), and timed bosses (1 or 2 tier). The game mode will include 6 teams of 15 players each, for up to 90 players. These teams can capture parts to score points on the team and individual leaderboards, locally and globally. Powers and Insta-Monkeys are disabled throughout the event, except for some buffs earned by the team.

Related: How to Beat Can You Find Both Solutions: BTD6 Advanced Challenge

There are 3 types of tiles in total: Regular, Banner, and Relic. Regular tiles reward a moderate amount of money, and monkey knowledge is available. Banner tiles reward an extra score, but monkey knowledge is unavailable. Relic tiles, in turn, are worth the least amount of points but give players and their team special relic knowledge while they have it. Parts of territories cannot be captured for longer than 24 hours. To prevent this from happening, set the highest possible score on it. There will also be a team store, but its goods and currency are not yet known.

This is everything you need to know about Contested Territories in Bloons TD 6. Are you excited about this mode? Write down in the comments section below!