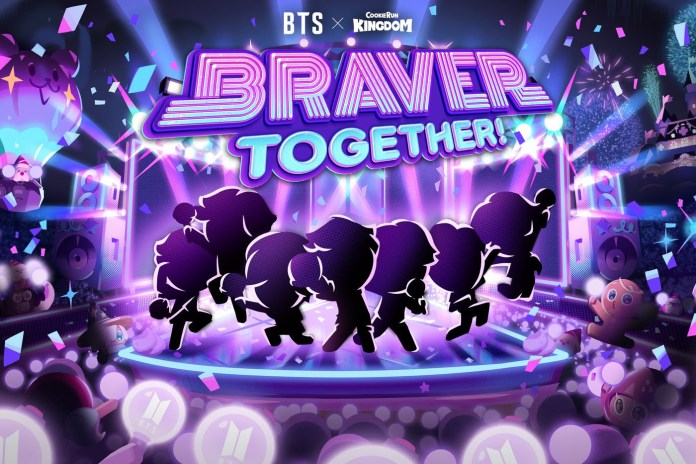 BTS, the famous K-pop group will be making their way to Cookie Run Kingdom mobile game through an in-game event called “Brave Together.” In this article, we’ll be telling you everything we know about Cookie Run Kingdom BTS collab.

A promotional image for the collaboration was released and features cookie silhouette versions of the entire BTS band from RM, Jin, J-Hope, Suga, V, Jimin, and Jung Kook.

Devisisters, the game’s publishers released an official description of the “Brave Together” event featuring BTS which reads:

“During the event, each member of BTS will be transformed into their own unique Cookie, and players will be transported to specially crafted BTS-themed maps with all new game lore explicitly created for this update. The event will culminate in an in-game concert by BTS for the Cookies in Cookie Run: Kingdom.”

In a conversation with Rolling Stone, Marie Suh, CEO of Devsisters USA, says BTS were the perfect partner for this new collaboration, building on Cookie Run’s core values of “bravery” and inclusivity. Suh stated that the Cookie Run community is about “celebrating diversity and choosing to be who you are. We knew how well our core values aligned with those of BTS, so welcoming BTS and ARMY into the Cookie Run Universe felt like a natural fit.”

Jaechan Cho, a marketing team member at Devsisters USA elaborated ARMY as “a unique group of fans who sincerely love BTS because of the band’s authenticity, and messaging of self-love, social justice, and mental health awareness.”

When Will the BTS In-Game Event Become Available in Cookie Run Kingdom?

The Brave Together in-game event will launch on October 13th and will see each member of the famous BTS transform into their very own unique Cookie. Once the in-game event is live, fans and players will also be able to explore special BTS-themed maps and adventures that are unique to each BTS member.

The game developers will release more content in the next few days before the in-game event goes live!