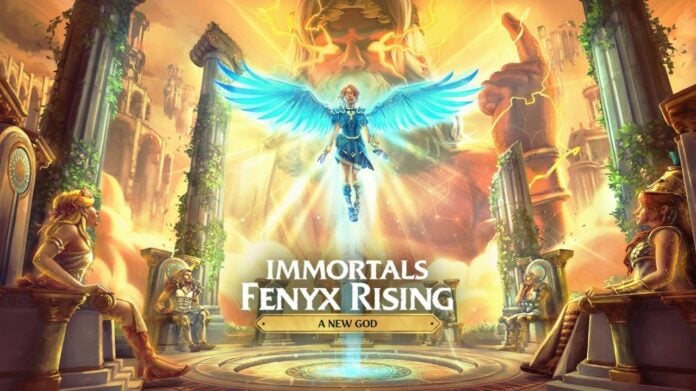 The Immortals: Fenyx Rising A New God DLC expansion is finally out, and with it, a lot of new content has finally hit the game. While the expansion is a standalone campaign, there are enough new things to play with that it is a worthy purchase for all those who loved the main game.

In this guide, we will take a look at the new Godly Powers, Blessings and gear included in A New God and how to obtain them.

As A New God will see Fenyx interact once again with Aphrodite, Ares, Athena and Hephaistos, the new Godly Powers aren’t completely new, but an evolution of those that Fenyx learned during the adventure on the Golden Isle. No matter which new power, they are all learned by completing each god’s Trial of Mystery.

Completing Aphrodite’s Trial of Mystery will unlock Phosphor Swap. Thanks to this power, you can exchange places with the Phosphor’s Clone at any time by pressing down on the left stick. This power is useful to complete some of the puzzles included in the expansion.

Completing Ares’ Trial of Mystery will unlock Wind Gust. By using Ares’ Wrath on the ground, you will create a wind gust that can be used to activate new mechanics and propel Fenyx in the air by opening the Wings.

Completing Athena’s Trial of Mystery will unlock Immortal Field Breaker, an upgrade to Athena’s Dash that lets Fenyx to smash through red barriers.

The new Blessings are unlocked by completing the Trial of Blessing for each of the four gods.

Completing Aphrodite’s Trial of Blessing unlocks Aphrodite’s Passion. This Blessing reduces the cooldown for Aphrodite’s first Blessing, Aphrodite’s Embrace, which revives you once if all health is depleted.

Completing Hephaistos’ Trial of Blessing unlocks Hephaistos’ Brilliance, which unleashes a powerful shockwave when you stun any enemy, knocking backing any other enemy in the vicinity.

The new weapons included in A New God are the Sword, Axe and Bow of Trials.

The Sword of Trials is found inside Ares’ Trial of Initiation and it increases Stamina restored by a set amount if you have more than 30 hits in your combos. The fully upgraded form also increases your combo count by 3 when using a Power Strike Finisher.

The Axe of Trials is unlocked in Haphaistos’ Trial of Artistry’s Initiation. The weapon increases stun damage dealt with a combo of 30 hits or higher. The fully upgrdaded form also increases your combo count by 3 when using a Power Spin Finisher.

The Bow of Trials, unlocked inside Athena’s Trial of Wisdom’s Initiation, increases headshot damage when shooting with full Stamina. The upgarded form also restores 25% of a Stamina chunk with each Charged Shot.

The new gear set found in A New God is the Trials set.

The Crown of the Horai, found in Aphrodite’s Trial of Love’s Initiation reduces received damage by 30%, with the upgraded form offering a 20% chance of getting a stamina orb every time you are hit.

The Vestment of the Horai, found in the Trials of Hermes, adds a second use of the Wings, allowing you to do a triple jump. The fully upgraded version also improves Stamina regeneration by 50%.