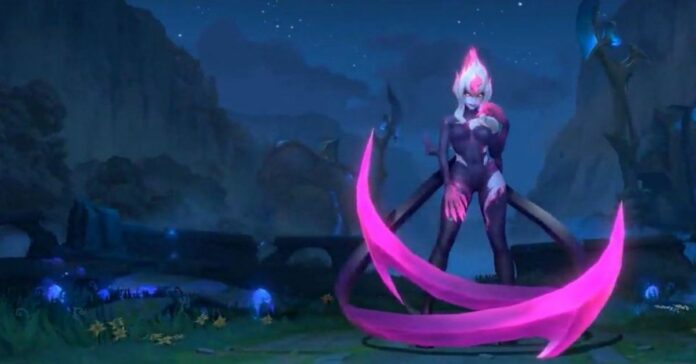 League of Legends: Wild Rift is a mobile version of a famous MOBA game. There are many different champions and everyone can find the character they like. But, the game is not the easiest product in this genre and there are many things you will need to choose for your character. This guide will tell you about Evelynn, her skills, strategy, and build.

Evelynn skills in League of Legends: Wild Rift are mostly about dealing damage and controlling a single target. She is some kind of a glass cannon that prefers to focus on squishy opponents. Her passive skill is called Demon Shade and it makes her invisible when she is out of combat.

Hate Spike is her first skill. It allows you to make two strikes with Evelynn’s lashers and deal a lot of damage. Her second ability is a control option. It can slow or charm a single opponent. Whiplash is Evelynn’s third ability. It is additional damage dealing option that also makes the champion more mobile. The skill increases Evelynn’s movement speed and allows her to pull herself to the target if the skill was used in the Demon Shade mode. Last Caress is an ultimate ability. When you cast it, Evelynn makes a wide slash with her lashers and warp backward.

Evelynn in Wild Rift is an assassin that mostly deals damage with her abilities. The best items for her are next:

The best Summoner Spells for Evelynn are Flash and Smite. The best runes for her are next:

How to Play Evelynn in Wild Rift

Evelynn in Wild Rift is an assassin that performs great as a jungler. She can clear camps really fast with her abilities. Also, her passive skill makes Evellyn a really good ganker as it is free invisibility. During the early game, she will be a nightmare for an opposing team with her opportunity to attack out of nowhere. When you reach the late game Evelynn is still useful as a good option against squishy characters as she is able to deal decent burst damage.