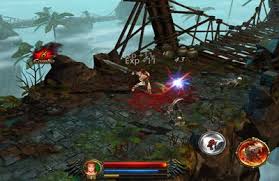 Eternity Warriors 3 is quite a good hack and slash game. The previous games, developed just like this one by Glu Mobile, were good games but the latest entry of the series is just bigger and simply better.

Even without spending money, you will have so much contents to sink your teeth into that it’ll be a while before you even think about purchasing some extra contents.

Learning the game is not too complicated, if you put some time and effort. If you don’t have that much time to invest in the game and learn all there is to know on the three playable characters, you can simply follow our own tips and tricks. Ready your weapons folks, it’s time to go into battle!

The three characters have a quite different behavior in battle, forcing gamers to take a different approach when dealing with a lot of different enemies.

The Warrior is, as expected, all about strength. Putting him in the thick of the action is the true way to go, as his high strenght and defense allow him to deal huge damage while not taking it too much. The additional skills he learns make him quite versatile, despite coming with a somewhat long wait time. In upgrading the character, you may want to lessen the wait time so that you may use them more often than usual.

The Mage is the exact opposite of the Warrior: terrible at close range, incredibly good at long range. A good variety of spells will allow her to deal a lot of damage while staying relatively safe. Unlike the Warrior, who’s good to use even without upgrades, the Mage requires a bit more practice in order to learn all about the spells’ range.

The Monk is another character that’s quite good at close range. Unlike the Warrior, his defense is not as good so he takes quite a lot of damage. Luckily the game gives you plenty of ways to avoid damage, thanks to his good speed. Using hit and run tactics is the real way to use this character, also considering the more limited attack range of the character. The Monk’s abilities allow him to get quite a few decent boosts so make sure to use and upgrade them as needed. Upgrading the Critical Hits abilities will help you take down the most powerful enemies without having problems.